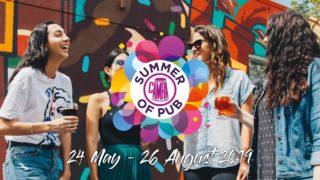 A recent YouGov survey conducted for CAMRA has shown that real ale drinkers are reaping the personal and social wellbeing benefits of pub-going. The survey, commissioned ahead of the campaign group’s Great British Beer Festival, has found that excluding those who don’t know, 56% of regular real ale drinkers who go to pubs have made one friend or more there, compared to 35% of the general pub-going population.

Furthermore, 30% of real ale drinkers report making five or more mates from their pub visits, compared to just 16% of all pub-goers, when excluding those who don’t know. Research conducted in 2016 with Oxford University that shows people who have a local pub are happier, more trusting and better-connected to their local community.

Given the pivotal role that pubs play, CAMRA is calling for substantial reforms to better support the industry and keep pubs open and thriving. This includes the introduction of a preferential rate of duty for beer sold in pubs and on-trade outlets, greater support for publicans tied to large pub-owning companies (PubCos) and a significant reduction in the business rates currently paid by our nation’s pubs.

Nik Antona, CAMRA’s National Chairman said: “Pubs play a significant role in communities across the country, providing a space for local people to meet, helping to tackle loneliness, and having a positive impact on the personal wellbeing of pub-goers. It’s vital that the government continues to act to reduce pub closures so that pubs remain at the heart of communities.

“In addition, it is imperative that beer-drinkers continue to support the pubs trade by visiting them. Our Summer of Pub campaign aims to show what pubs have to offer and remind people how important the great British pub is to communities. From special screenings of the Women’s World Cup to comedy evenings, beer tastings or special talks, pubs have pulled out all the stops to celebrate this summer and provide something for everyone.”

For more information on the Summer of Pub campaign visit: www.camra.org.uk/summerofpub/

Join CAMRA at the Great British Beer Festival 2019 or www.camra.org.uk/join

All figures, unless otherwise stated, are from YouGov Plc. Total sample size was 2055 adults. Fieldwork was undertaken between 12-15 July 2019. The survey was carried out online. The figures have been weighted and are representative of all UK adults (aged 18+).

The Great British Beer Festival is one of the biggest, most exciting and well-known events in the beer and cider world. Organised by the Campaign for Real Ale (CAMRA) and run by volunteers, it brings hundreds of real ales, international beers and real ciders and perries under the iconic Olympia roof. Tickets can be purchased online: http://gbbf.org.uk

The festival opening times are:

Last Admission: half an hour before close.