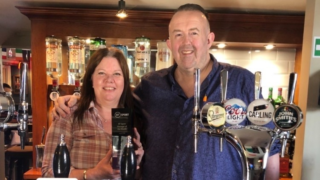 With July confirmed as the earliest date for their reopening, the UK’s pubs are facing a minimum of six further weeks of closure, followed by the challenge of reopening with social distancing measures. Despite the uncertainty ahead, licensees and their teams across the country are continuing to do sterling work to help their local communities through the Covid-19 pandemic.

Des O’Flanagan, PubAid co-founder, said: “It came as no surprise that pubs are likely to be one of the last to leave lockdown, but it is undoubtedly going to be tough for many pubs. The fact that so many community pub heroes are putting others first at this difficult time is genuinely humbling and a demonstration of how pubs are a force for good, in their local communities and wider society.

“Let’s hope that pubs are able to reopen safely as soon as possible, so that they can benefit from at least a portion of the trade over the summer months.”

At The Garden House in Norwich, operators Tanya & Jonathon Childs have given £2,000 to the NHS. The couple won BT’s Sports Manager of the Month and the winnings – which were initially £1,000, doubled by BT when they heard of the pub’s community support – are being used to provide televisions for NHS staff to use during down-time and mobile tablets for patients to stay in touch with loved ones.

The Queen Victoria, Brighton has launched ‘Portable Pub Lunches’, delivering hot lunches to local people in self-isolation or on low income. The not-for-profit service is run by the pub team, helped by a band of delivery volunteers. Sales of its Sunday Roasts – which are so popular with local customers that they sell out most weekends! – are helping to keep the pub afloat and ensure they are able to continue the free lunch delivery service.

The White Swan in Pickering has been doing all it can to help local NHS workers. The furloughed staff team have volunteered to cook and deliver lunches to replace the ‘soggy vending machine sandwiches’ at the local hospital, and to look after NHS staff staying in the pub’s bedrooms, free of charge. What’s more, the pub team are planning to offer ‘Holidays for Heroes’ once lockdown is lifted, giving 200 free overnight stays to frontline NHS workers, and have received £250 in donations from the local community to help fund the food and drink on these stays.

The Brook Inn in Plympton, Plymouth, has been selling Sunday Roasts to local residents. For every meal sold – at cost price of £10 – £2 has been going into a pot to provide free or reduced-cost meals for local vulnerable people.  So far, the pub has raised £2,750, and has helped to set up a new food bank for the area, working in partnership with Plympton Team Ministry.

Matt Todd, licensee at The Wonston Arms in Hampshire, delivered the beer sitting in his cellar at lockdown to local people to stop it going to waste. The move was so popular that he has continued the service, taking fresh cask and keg beers and ciders delivered from brewers to residents within a short drive of the pub. Matt even takes a barstool from the pub with him so he can sit down and speak to some of his locals, who are missing the social interaction of their local – at a socially responsible distance of course.

The Farmhouse at Redcoats, part of Anglian Country Inns, has been keeping its local community engaged with a series of recipes for some of the pub’s most popular dishes, including lockdown favourite sourdough bread. Gardening tips are also being shared on social media. The pub garden, and its beehives, are being tended by the team, although some members have joined the national effort to pick fruit

The Elephant in Finchley held a charity beer sale earlier this month and raised £933 for the North London Hospice. Zoe Beresford, assistant manager at the Fuller’s pub, had the idea when she realised that much of the pub’s pre-lockdown stock of bottled beers was on a short shelf life – so rather than waste good beer, they sold it for charity. Customers were asked to donate at least £5 for a pack of four bottles, for collection same day from the pub, with full social distancing.

Malmesbury pub The Red Bull stepped in to keep a ‘meals on wheels’ service going with local charity Heals of Malmesbury. The pub team, led by licensees Dave & Nicola Moody, are preparing 40 meals, three times a week, which are delivered to local vulnerable individuals and families by a team of volunteers.  The service started on VE75 Day, with a very British meal of fish & chips!

Richard Curtis, landlord at The Portsmouth Arms in Hatch Warren, Basingstoke, has been hosting a daily quiz through lockdown, which has become hugely popular, with 300,000 people having taken part.  Over the Bank Holiday Weekend earlier this month, Richard smashed the Guinness World Record for the longest pub quiz, which ran for more than 34 hours, with 75,000 participants answering questions on Facebook Live.  As well as putting the Hall & Woodhouse pub in the record books, the quiz also raised £21,000 for local cancer charity The Pink Place.

PubAid is a working party created in 2009 to promote UK pubs as a force for good in their local communities, sharing the message that they raise over £100m per year for charities and contribute £40 million to grassroots sport. PubAid runs the World’s Biggest Pub Quiz, which takes place every March, and the Charity Pub of the Year Awards, which received close to 90 entries in 2019.