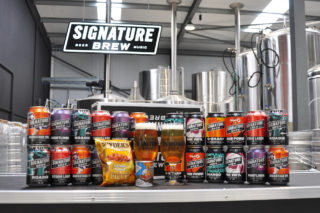 Delivered by out of work Musicians: Signature Brew Offer Pub in a Box Complete with Glasses Beer Mats and Pub Quiz, Click & Collect, 20% Off and Free Delivery in Bid to Keep Business (and Beer) Flowing

“Our Blackhorse Beer Mile brewery bar, our burger bar, The Collab, in Walthamstow and our Taproom in Haggerston have seen lots of support from locals over the past few weeks, we want beer lovers to continue to support their local venues and shops as best they can during an unusual time, in line with government guidance; we’re chatting to our pub and venue stockists to support them in whatever ways we can; we will be launching Click & Collect options from all of our venues across Hackney and Waltham Forest for anyone concerned about social distancing.

We’re also going to be launching ’The Pub in a Box’ for those who have been asked to self isolate, it’ll include our core range of beers (something for everyone), beer glasses, beer mats, a vinyl record, a pub quiz, a playlist, pub snacks, the works!

We think it’s best to remain calm, carry on with life, support local and to support artists however we can, without being alarmist but with a good eye on what the powers that be, advise us to do. We’re planning one hell of a piss–up in a brewery when all of this blows over.” (Tickets here).

We appreciate you might not be able to head to the pub right now, so we thought we’d bring the pub to you. Introducing Signature Brew’s Pub In A Box, a selection of our award-winning beers, with glassware, snacks, a music quiz and exclusive playlists curated by music journalists to accompany the beers themselves.

These are available throughout the UK. If you’re eligible for local deliver, we’ll be hand delivering from the brewery, hiring musicians who have had their tours cancelled to help us get beer to your home.

— Beer mats, because it wouldn’t be a pub without them

— Spotify playlists, curated by music journalists to accompany each beer

Signature Brew (www.signaturebrew.co.uk) is on a mission: to revolutionise the quality of beer at live music events. Launched in 2011, Signature is the world’s number one brewery for band collaboration beers, having brewed with Idles, Mogwai, Alt-J, Slaves, Mastodon, Frank Turner, Rodney P, Enter Shikari and many more. With a fresh look and feel from renowned branding experts, B&B, 2020 sees Signature launch their core range of music-inspired craft beers to the very best bars, venues, festivals and shops around the world. Brewed in Walthamstow, enjoyed by beer lovers and music superfans globally, Signature don’t just create exciting collabs, their beers are of unrivalled quality, and they were crowned SIBA’s highly prestigious Brewery Business of the Year 2018.

Led by founders Sam McGregor and Tom Bott, the brewery team is made up of musicians and music fans alike and – with an unwavering commitment to quality – Signature Brew has channelled the spirit and energy of live music into a brewery that stands for craftsmanship, artistry and passion. Their SIBA win enabled the small team to scale up, launching a successful crowdfund, enabling Signature to build the UK’s most state-of-the-art brewery for its size, immediately quadrupling capacity to an initial annual output of 20kHL (4 million pints) – a significant step up from their previous 5kHL brewery.

The new Walthamstow brewery is set to be a killer venue for new launches and celebrations, Signature are planning four seasonal parties a year, releasing new collabs and supporting their favourite bands. Located inside the brewery, The Brewer’s Bar allows drinkers to enjoy the sights, sounds and smells of the brewery, with tours on the cards for 2020 and film nights running every other Thursday. In March 2020 the brewery will be taken over by the front-women of the Manchester Punk Festival who will collaborate with Signature on a beer made for International Women’s Day, to be sold at MPF, and celebrated with a day of female-fronted performances.

Signature Brew’s beers are rolling out now around shops, bars, pubs, venues and festivals around the country, with more stockists and ground-breaking collaborations to follow from Spring 2020.