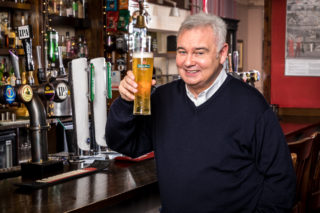 TV presenter and lifelong football fan, Eamonn Holmes, has launched his own podcast series, which sees him cosy up next to household football names in great British pubs.

In the brand new series, Eamonn shares a pint with football managers, including legendary gaffers Sam Allardyce, Stuart Pearce and Martin O’Neil, as they speak candidly about their highs, lows, unforgettable experiences and how they really felt during some of the nail biting moments that have shaped British football over the last forty years.

Champions of the great British pub, Heineken, are sponsoring the series showing how pubs really are the home of great conversation. The first episode was recorded at the award-winning Chandos Arms in North London, and sees Eamonn chatting with Martin O’Neil.

Eamonn Holmes said: “There really is no place like the Great British pub, it’s a unique place where people have come together for hundreds of years and is a place where memories, and now podcasts, are made. It’s also the place where we tend to be the most vocal about our teams and their rivals. So where better to sit down for a chat with some of the biggest names in the game?

“For me, pubs have always been a place where relationships start, friendships are cemented and memories are made.  I’m passionate about football and have so many memories of watching the big matches in the pub. Sharing a pint with some of them men who were in charge of the teams was such an honour. They offered so much insight to their careers – plus some big opinions on the current Premier League season too. I really hope this new podcast helps unite football fans in their love of the game and reminds them how much fun it can be watching the big matches down the local.”

The podcast launches today and is available on iTunes, Spotify and other major podcast platforms.

Stephen Watt from HEINEKEN says: “This new podcast series plays at the heart of British culture – pubs, football and chat.  ‘A Pint with Eamonn and the Gaffers’ will remind people how great their local pub is to get together, watch a game and have a chat. ‘Fancy a pint?’ to us means ‘let’s go to the pub and catch up.’ Pubs are the original social network and, without doubt, the best place to watch the football with your mates.”

Through its Star Pubs & Bars business, HEINEKEN owns 2,700 pubs across the UK, and demonstrates that the great British pub is at the heart of communities and a place where people from all walks of life can come together.

Headquartered in Edinburgh, HEINEKEN is the UK’s leading pub, cider and beer business. The company owns around 2,700 pubs as part of its Star Pubs & Bars business and employs around 2,200 people. We are passionate about our cider and beer brands and the outstanding service that we offer to our customers. Our unrivalled portfolio of brands includes Heineken® 0.0, Heineken®, Foster’s, Strongbow, Kronenbourg 1664, John Smith’s, Bulmers, Amstel, Birra Moretti and Old Mout, backed by a full range of niche and specialty brands.