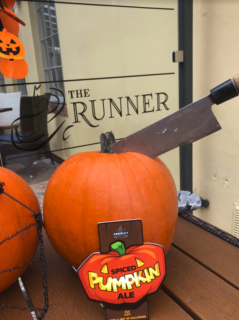 Trick or Treat! With Halloween just 20 days away, Arkell’s is celebrating this spooky annual event by bringing back their Pumpkin Spiced Ale.

Halloween dates back to 1745, having originated from the ancient Celtic festival of Samhain, when people would light bonfires and wear costumes to ward off ghosts. Created to mirror the origins of this annual event, which is celebrated on 31st October, Arkells’ Pumpkin Spiced Ale is brewed using real pumpkins prepared in the Brewhouse, with added spices to produce a devilishly warming, malty beer.

Alex Arkell, Head Brewer has been working hard in the kitchen carving his pumpkins ready to be used in the ale, he said:“We’re incredibly excited to be bringing back one of our favourite  brews this year. It’s a lovely ale with a great aroma and it’s just perfect for a spooky night in or out! The pumpkin brings a degree of  sweetness and we’ve spiced up our new brew with a mix of cinnamon and other spices to make a deliciously dark beer worthy of the time of year. It’s a time to celebrate the end of summer and harvest, and the beginning of those cosy winter months.”

Arkell’s Pumpkin Spiced Ale will be available at most of Arkell’s nearly 100 pubs across Wiltshire, Gloucestershire, Oxfordshire, Berkshire and Hampshire in the run-up to Halloween, so keep an eye out for their bright orange Pumpkin Beer Clip. Or purchase a mini keg from The Grape Grain Warehouse located at Arkell’s Brewery in Kingsdown, perfect for your ghoulish Halloween party!

Arkell’s Brewery was established in 1843 by John Arkell. Arkell’s is Swindon’s oldest business and one of just 29 family breweries left in the UK. This year Arkell’s is celebrating 175 years in the brewery business and has four members of the Arkell’s family still remaining, Chairman James Arkell, his cousin Nick Arkell, Head of Sales, and James’ sons George, and Alex Arkell are Managing Director and Head Brewer respectively.

The Arkell family work at the brewery alongside generations of other local families, brewing real ale and looking after nearly 100 pubs across Wiltshire, Gloucestershire, Oxfordshire, Berkshire and Hampshire. Arkell’s ales include Award-winning beers such as Wiltshire Gold, 3Bs, Kingsdown and Hoperation IPA. Special ales are brewed regularly, with Head Brewer, Alex Arkell, keeping the art of craft ale alive, offering drinkers new tastes and flavours all hand made in their brewery.