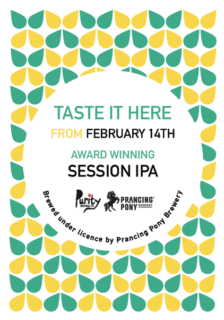 Award-winning breweries Purity Brewing Company (UK) and Prancing Pony Brewery (SA) have a lot in common.  Both brew superb quality beers with great consistency and both breweries are founded on the principles of sustainability.

In 2019, Prancing Pony and Purity Brewing entered into an agreement that allows each brewery to brew and distribute a range of selective beers and this is exactly what they have just done.

“Our breweries have a lot in common and we can identify with every aspect of their business model right down to their involvement with the community and the arts.  Like our brewery, Purity is a regional brewery, although much bigger than ourselves.’, says Corinna CEO and Co-Founder of the Pony.

Purity has been brewing and distributing Prancing Pony’s Hopwork Orange for a while and they will soon brew and release the India Red Ale to the beer drinking community in the UK.

For Australia the wait is finally over.

On the 14 of February, several venues around Australia will be tapping the Purity Session IPA for the first time.  A moreish session IPA, with grapefruit peel flavours and brimming with tropical fruit notes this Session IPA is perfect for the Australian climate.

Paul Halsey, CEO and Co-Founder of Purity has trust in the brewing process and the taste of the beers.  “It is exciting to see Purity’s first beer being poured in Australian pubs. The guys at the Pony have express air-freighted samples of the beer and we have compared the beers brewed in Australia with the beer that we make in the UK.  To be honest, we think that they have done a great job to replicate the beer and of course, it helped that we have the same Braukon brewing equipment and we used the same malts and hops”, says Paul.

The beer is available in kegs with 375ml cans soon to come.

The design on the beer decals and cans comes from a partnership between Purity and students of the Birmingham School of Art. It was designed by two talented final year students, Zunaira Muzaffar and Beth Nicol, winners of the Purity Seasonal Beer Design Award 2018.

The Purity Session IPA has also won World’s best Session beer at the 2019 at the World’s Best Beer Awards in the UK.

For small breweries the size of Prancing Pony, Licence agreements are not a common practice but they make a lot of sense from an economic and sustainability point of view.  It avoids the lengthy transport times on sea and beers get to into the hands of customers totally fresh.

Mouth-watering fruity aroma, this Session IPA tastes of very fresh grapefruit, orange peel and tropical breakfast juice but balanced with a moderate bitterness. Sessionable and appealing on a hot summer’s day, this Session IPA is vegan and vegetarian friendly and a great match with Pizza.

Central to the brewery is a strong commitment to supporting the environment. Purity only uses natural ingredients, supports recycling programmes and respects the community. Also, waste products are recycled through a pond and wetland system. This sustainable eco-system helps minimise carbon dioxide emissions and encourage wildlife diversity.

Prancing Pony Brewery is an independent brewery located in the Adelaide Hills and brews beers using 4 base ingredients, water, grain, hops and yeast, only.  Established in 2011, the brewery has won significant Awards, including a Supreme Champion Trophy, Champion Trophies and 99 medals.  The Pony takes pride in building communities and supports local emerging artists in music and visual arts.

Located within the brewery is the Pony’s buzzing venue where local and visitors can taste the beers matched to food, listen to music and become part of a supportive community.  The brewery sources where possible ingredients locally and has made a commitment to reduce, re-use and recycle for all aspects of its operation and harvests sun energy on their 50Kw solar system to support sustainability.