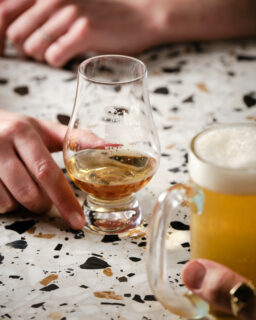 The distillery will welcome some of Edinburgh’s best craft breweries and a selection of Scottish new wave whisky distilleries.

Guests will have access to Holyrood Distillery’s spirits lab and whisky distillery, get the opportunity to chat with local brewers and distillers, as well as getting the chance to enjoy pizza slices from the acclaimed Pizza Geeks, who’ll be serving up their famous Neapolitan pizzas in the distillery courtyard.

There are three time slots to choose from, 12pm, 3pm and 6pm, each lasting two and half hours. Customers can stay afterwards or come earlier to explore the exclusive exhibitor ‘half and half’ pairing available at both the distillery’s indoor bar until 10pm, and the courtyard until 8pm. DJ’s will be playing live sets throughout the event.

There will also be a Mash Up afterparty taking place at the nearby High Dive bar, priced at £10 per ticket, which includes a beer, cocktail, and whisky hi-ball. Another local drinking spot, Tipsy Midgie will host an exclusive dram guided tasting.

“We’re thrilled to be hosting Edinburgh’s first combined beer and whisky festival. It’s an awesome opportunity to bring together some of Edinburgh’s finest breweries and Scotland’s most exciting distilleries.

“We want to put a spotlight on the outstanding brewing and distilling heritage of the city, but also have fun and bring people together to celebrate the delicious tradition of the Scottish ‘half and half!’ “

Tickets for The Mash Up can now be purchased on the Holyrood Distillery website www.holyrooddistillery.co.uk.  Tickets are priced at £35 per person and include two half pints and a dram from chosen exhibitors, as well as tasting samples (10ml) from everyone else.

Recognised as ‘Visitor Attraction of the Year’ at Icons of Whisky 2021 Awards, Holyrood Distillery can be found at 19 St Leonard’s Lane, Edinburgh, EH8 9SH. Call: 0131 285 8977 or visit www.holyrooddistillery.co.uk