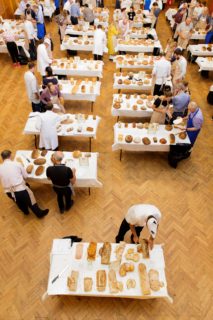 A brewer and a jam maker – both with Royal Warrants – have come together to create a delicious new beer, Jam Sandwich, to celebrate the Tiptree World Bread Awards with Brook Food and it will be premiered at the Awards Evening on Tuesday 15 October 2019 at St John’s Hyde Park, London.

Every year, bakers from around the UK send hundreds of loaves to Cathedral Hall, Westminster Cathedral for judging. In years gone by, leftover bread was given to homeless charities, but food hygiene rules have made this more difficult.

Step in Toast Ale, the hugely successful not-for-profit which rescues bread that would otherwise go to waste and turns it into craft beer.

Windsor & Eton Brewery were the first to rise to the request from Toast Ale to be involved. They will be gathering up the leftover bread from the Judging Day and blending it with strawberries, raspberries and cherries from Tiptree, the world-famous jam-makers in Essex.

Master brewer Paddy Johnson says, “We love collaboration, in this case with both Toast Ale and Tiptree, because it always generates new beer ideas that we wouldn’t have come up with by ourselves.”

“At Toast we’re dedicated to growing a community of change-makers, who work with us to brew planet-saving beers and support charities trying to fix the food system. It’s been great to have the chance to team up with our friends at the Tiptree World Bread Awards and Windsor and Eton Brewery on a collaboration beer brewed with over 100 kilograms of the best surplus bread in the world, as well as surplus fruits. Here’s to a beer with more taste and a world without waste!”

Jam Sandwich will be enjoyed by Finalists, Judges and aristocracy of the bread baking world at the Awards Evening and some of the proceeds of sales of the beer thereafter will be donated to Action Against Hunger.

Tiptree is headline sponsor of the World Bread Awards. The first Tiptree preserves were made in 1885 and Tiptree jams and preserves are now sold across the world, many of them made with fruit still grown on their farms in Essex www.tiptree.com

Few breweries combine tradition with innovation as well as Windsor & Eton Brewery whose shire horses and dray deliver its beers locally – including some new cutting-edge beer styles developed by its passionate brewing team. Its many awards include winning national competitions and being named Waitrose Small Supplier of the Year, and it has also been awarded a Royal Warrant as Brewer to HM The Queen https://www.webrew.co.uk

Toast Ale is an award-winning craft beer brewed with surplus fresh bread that would otherwise be wasted. All profits go to charity https://www.toastale.com

Tiptree World Bread Awards with Brook Food are the UK’s leading awards celebrating with work and craft of bread bakers. Launched in 2013, they are now the annual fixture of the year in British bakers’ calendar https://www.worldbreadawards.com