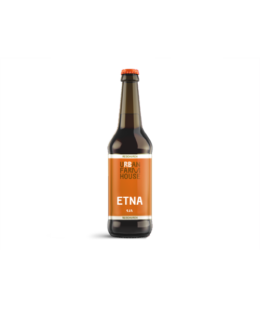 Redchurch launches ETNA at Brew London at the end of February, the 23rd product in this highly respected brand.

This traditional Gose has the addition of Sicilian blood orange juice that creates a sharp and refreshing springtime treat.

• Tasting Notes The addition of Sicilian blood orange juice to a traditional Gose base creates a sharp and refreshing springtime treat. Clean and effervescent, with a restrained but noticeable sourness accompanied by the pink Himalayan sea salt brings a fruity twist to the classic Gose style.

Urban Farmhouse began as a creative project based out of the railway arches in Bethnal Green and quickly developed into a leader in the mixed-fermentation market. Pioneered by James Rylance (now of Harbour Brewing), the goal was to create a series of experimental brews which pushed the boundaries of flavour and really brought the beer back to nature. Using mainly homegrown and foraged fruit, herbs and spices with our house lactobacillus cultures in the midst of a concrete jungle are what truly makes it Urban Farmhouse.

Trevor Porter, Managing Director at Redchurch, comments, “We are excited about this new release and selected the flavour profile based on consumer feedback. Many of our customers have expressed an eagerness to try it. The continued success of this brand is a testament to our brewing pedigree”.

History of Gose Beer – The origin is tied to Goslar, a town in Eastern Germany. Whether the beer was named for the town or the Gose River flowing through the town is unclear, but the town was named for the river, so it’s likely the beer’s name relates to the river also.

The Redchurch approach is exceptional beers brewed with respect for the process and flavour. The identity of the beers pays homage to the brewery’s East London roots, and the unique blend of science and freestyle brewing has propelled the brand into a new era, spearheading the growth and interest in quality craft brewers in the UK and further afield.

Redchurch Brewery was founded in Redchurch Street, Shoreditch, London in 2011 and has now grown and expanded to a purpose-built modern brewing facility in Harlow, Essex. Since May 2019 the brewery is under entirely new management whist still retaining all brewing staff.

There are six core beers in the collection. These won in the following categories at the 2019 World Beer Awards: