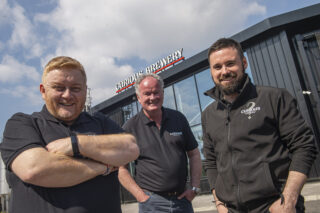 Risk Capital Partners (RCP) has marked the completion of its purchase of the award-winning Curious Brewery by appointing a new management team to lead the business into the next phase in its development.

Pub and brewing veteran Mark Crowther and former UK head of Budweiser Budvar Simon George join the business as chairman and managing director, respectively. They will take the business forward following its acquisition by RCP, the private equity firm led by Luke Johnson, from English wine company Chapel Down.

Commenting on the appointments, Johnson said: “We are delighted to be working with Mark and Simon, who together bring an enormous wealth of experience and expertise, adding immense value to this business. I couldn’t think of two better people to help unleash the potential for Curious Brewery, and we’re looking forward to supporting them as they get stuck in.”

Crowther was most recently CEO at Liberation Group, and has held senior positions at Carlsberg, Brakes, and Diageo. He is currently non-executive chairman at Portobello Brewery. George, who will be responsible for day-to-day operations, led Budweiser Budvar in the UK for seven years before stepping down in January, and previously held senior commercial roles at Magners, Coors and Constellation Brands.

Crowther said: “This is a high-quality business with a great group of people, an exceptional, premium range of superb beers and ciders, and an extraordinary, market-leading set up with its state-of-the-art brewery, and accompanying tap room and restaurant. Now, with the support of RCP, it has one of the most experienced and supportive sector-specialist investors in the market, and I am delighted to have the opportunity to work with them, and to support the team as we embark on this exciting new phase.”

Commenting on his appointment, George said: “I am tremendously excited to be involved in this unique opportunity. We see enormous potential to build this business and we are going to work very hard to ensure this fantastic collection of premium beers and ciders are available, enjoyed and shared in more places, across the UK and internationally.”

The change of ownership follows a multimillion-pound development of the new brewery in 2019. Located in Ashford, Kent, opposite the international train station it was described at the time as a ‘cathedral to beer’ and was constructed alongside a visitor centre and a 120-cover bar-restaurant. The deal will be followed with planned investments in a new bottling and canning line, as well as increased support for the sales and marketing functions.

The brewery, which has four core brews – an award-winning lager, a session IPA, a cider and a porter – was started in 2011 by Chapel Down. The pandemic saw the group refocus on its core wine business, giving rise to the opportunity for RCP to acquire Curious Brewery. As well as acquiring the brand and assets, the deal, which was completed earlier today, will see all of the company’s staff move across to the new set up.

As well as listings in many hotels, bars and restaurants, its beers are sold in some prime landmark venues including luxury department stores Harrods and Selfridges, as well as Waitrose and Majestic, and leading arts venues such as The National Portrait Gallery, Royal Festival Hall and The Royal Opera House.

Commenting on the completion of the deal, Johnson added: “We see terrific potential in the Curious business, and we’re very excited about its future, despite the challenges of the past year. Brewing will always be a cornerstone of British culture, and the craft beer revolution has only strengthened that. Curious is a great brand made in a fabulous facility, and with our support we believe the business can be developed further. The restaurant and tap rooms will be opening to welcome guests as soon as we are allowed. We are particularly pleased to be taking on all Curious employees, who bring with them a wealth of insight and knowledge.”

Notes to the editor

Curious Brewery is an award-winning independent business based in Kent and backed by Risk Capital Partners. It produces a range of beers and ciders, including its flagship award-winning lager, Curious Brew. Located in Ashford, opposite the international train station, the brewery underwent a multi-million pound development in 2019 and now includes a visitor centre, tasting room and a 120-cover bar-restaurant. First established in 2011 by English winery Chapel Down, beers and ciders from Curious Brewery are served across the UK in top restaurants, hotels and pubs; luxury stores including Harrods and Selfridges; supermarket group Waitrose and specialist drinks retailer Majestic, as well as landmark venues such as The National Portrait Gallery, Royal Festival Hall and The Royal Opera House.

Risk Capital Partners is a private equity firm co-founded by Luke Johnson. It previously backed Laine’s Pub Co and Draft House pubs, and Luke Johnson has been involved in the licensed trade since the age of 18.