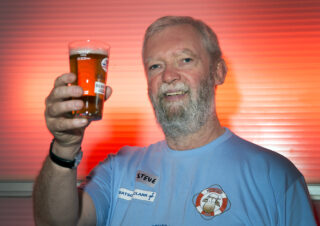 The end of lockdown may be in sight and following the Prime Minister’s announcement, organisers of the Rotherham Real Ale & Music have confirmed the popular event will return in 2021 in a virtual format.

Held annually in March since 1992 the popular festival will give regular festival goers a chance to come together to experience a series of virtual beer tastings, as well as chance to enjoy live music which will be streamed live from a closed doors event taking place on the stage of the Cutler’s Arms.

Taking place on 20th March for one day only, tickets for the event priced at five pounds can be purchased from the Rotherham Real Ale and Music Festival’s website: www.magnarealale.uk, with proceeds from the event being used to support Rotherham Cancer Care Centre.

The live performance will begin from 19:30 and feature popular acts At the Arcade, the G-Men and Bloodlines. A limited edition glass has been produced for the event, as well as a special Festival Ale  which has been brewed by Chantry Brewery.

To support the region’s brewing community, festival organisers are also planning to host a series of live virtual beer tastings on 19th March, with details to be confirmed soon.

In order to maintain the rich history of fine ale, delicious beers, and luscious lager normally available by the barrel load at Magna, the festival has teamed up with Chantry Brewery to offer festival goers free delivery on all beer orders to homes with an “S” postcode, as well as beers being available to addresses across the UK for a small delivery fee.  Special tasting packs including the commemorative glass and specially brewed beer can be purchased from the Chantry Brewery website.

With proceeds from the event being used to support live music and local good causes which have been particularly hard-hit as a result of Covid-19, sponsorship opportunities are available, offering local businesses to see their name in lights on the stage.

“The past twelve months have been incredibly difficult for live music venues and independent brewers. We wanted to try and capture the spirit of the Rotherham Real Ale and Music Festival in a safe, socially-distanced way and decided to team up with Chantry Brewery to try and rekindle some of the magic that has made the Rotherham Real Ale and Music Festival such a well-loved event over the years.

“We wanted to continue that tradition, and although sadly it’s not possible to host the festival in the usual way this year, we wanted to do our bit to support our local music venues and artists which have been particularly hard-hit by Covid-19.

“This festival is about celebrating the local talent and amazing beer we have available here on our doorstep, but it is also about raising a glass to charity. All donations made during the festival will be warmly welcomed and we are confident we can raise a large amount as viewers from all around the country tune into the YouTube event happening on 19:30 March 20th.

Since hosting its first festival in 1992 at Oakwood Comprehensive School, the Rotherham Real Ale and Music Festival has grown to become one of the most popular beer and music festivals in the north of England. In 2010, the festival relocated to Magna and since that time, proceeds from the event have been used to support a wide range of good causes throughout South Yorkshire.

Tickets will be made available via the festival’s website from Thursday 25th February.

Beers and beer tasting packs which include this year’s limited edition glass will also be available from 25th February: www.chantrybrewery.co.uk