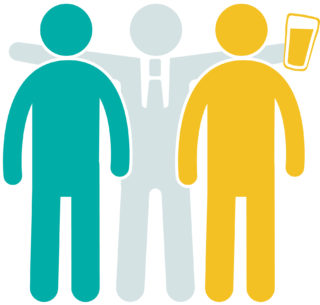 A third (35%) of drinkers in the UK drink more than they intended because they were encouraged by others, reveals a new study by independent alcohol education charity, Drinkaware.

The research, published in Drinkaware’s annual monitor of more than 2,000 adults, unveils a culture of peer pressure around drinking. More than a third (35%) of drinkers say that pressure to drink is common in their age group – rising to 60% in the 18-24 age group – and 57% would like it to be less prevalent.

More than one in three (37%) UK adults who drink alcohol report drinking more than they planned because they were in a round, a third (34%) drank more because they did not want to be impolite and refuse a drink, while 29% said they wanted to keep up with others.

Some drinkers employ tactics to resist the pressure to drink, such as nursing their drink to avoid having another (37%), while 11% say they actively seek friends who drink little or no alcohol.

For those who do drink more than they intended, it’s friends and co-workers who are most likely to be influential, with 60% of people claiming their friends have encouraged them to drink more than intended and 43% of people in work saying there is too much pressure to drink when socialising with work colleagues. Thirteen percent of men who drink are influenced to drink more by their boss or a superior, compared to 8% of women.

A significant proportion of adults are contributing to the culture of pressure; one in five (21%) adults who drink admitted to having encouraged someone to drink more alcohol after they said they didn’t want to. A similar number had given someone an alcoholic drink or topped up their glass without asking first (19%).

Drinkaware Chief Executive, Elaine Hindal, says: “Our research lifts the lid on a culture of peer pressure in this country. It speaks volumes that over half the adult population say they would like there to be less pressure to drink.

“And it seems from our new research that being polite, not wanting to confront a situation and feeling the need to keep up could be preventing many of us from standing up to that pressure.”

While the number of people who drink at least once a year has decreased year-on-year (81% of UK adults compared with 84% in 2018), the results show pressure to drink could be fueling binge drinking. Of those polled, 46% of people who binge drink* reported drinking more than intended because they’ve been encouraged by others, compared to 35% among other drinkers.

Hindal added: “Pressure to drink in the majority of cases isn’t malicious, it may not even be conscious. Most people just want the people they’re with to have a good time. But regularly drinking alcohol above recommended levels can significantly increase the risk of developing a range of health conditions.”

Helping customers to control their drinking

Licensees and their teams can play an important part in reducing the alcohol harms that can arise when people are pressured into drinking more than intended. Drinkaware recommends that pubs and bars put in place some simple measures to help customers in their venue to control their drinking and resist peer pressure to consume more than intended.

These could include: offering an interesting range of low and no alcohol drinks; selecting house wines at the lower end of the ABV scale, and offering them in 125ml serves, and serving food for the same hours as drink is served.

It’s also helpful to have team members who are able to spot the signs of someone who is drinking more than they should, perhaps because of peer pressure. Drinkaware’s Alcohol Vulnerability Awareness e-learning course helps staff to understand what vulnerability means and gives practical advice on how to support them. For more information: elearning@drinkaware.co.uk

Finally, if you suspect a customer is buying alcohol for someone who is already drunk – or who is drunk themselves – then selling them a drink is against the law. Drinkaware and the British Beer & Pub Association have produced two posters to help communicate this to customers – ‘Can’t Get Served’ and ‘Mate’s in a State’, which can both be downloaded free of charge from the Drinkaware website here

All figures, unless otherwise stated, are from YouGov Plc. Total sample size was 2145 adults across the UK Fieldwork was undertaken between 11th – 12th July 2019. The survey was carried out online. The figures have been weighted and are representative of all UK adults (aged 18+).

Drinkaware has 133 funders, including UK alcohol producers, retailers in the on-trade and off-trade and wholesalers

Among working adults (who drink), two-fifths (43%) agree that there is too much pressure to drink when socialising with work colleagues. One in five (20%) say they have had more alcohol than intended because of pressure to drink from co-workers while one in ten (11%) have experienced pressure from a boss or superior. More than half of all workers (53%) would like less pressure to drink.

Men are significantly more likely to report ‘binge’ drinking than women (64% of men versus 50%) women, and when they do drink, over a third (37%) report drinking more than intended because they were encouraged by others (versus 33% of women).

The study reveals that men who drink are more likely to feel the pressure of social settings; two fifths of men who do drink alcohol (42%) drink more than they intended because they feel the pressure of getting a round in (versus 31% of women), they report drinking more to ‘keep up’ with others (33% versus 24% women) and are also more influenced to drink more by their boss or a superior (13% of men who work versus 8% of women who work).

More than one in three people in Scotland (39%) report drinking more than intended because they were ‘in a round’. A third (31%) drink more because they did not want to be impolite and refuse a drink. A greater majority of people in Scotland who drink (63% compared to 57% of the UK overall) say they would like there to be less pressure to drink alcohol.

In Wales, the most commonly reported reason for drinking more than intended is because drinkers didn’t want to be impolite and refuse a drink (37% compared to 34% in the UK overall).

Two fifths of those polled in Scotland and Wales (42%) admit to having nursed their drink to avoid pressure to have another, significantly more than the UK overall (42% compared to 37%). In addition, one in five Scots (22%) and a quarter of Welsh (24%) have made an excuse to avoid drinking an alcoholic drink instead of saying ‘no’ (compared to 20% in UK).

Among working adults in Scotland and Wales (who drink), two fifths (43% and 45% respectively) agree that there is too much pressure to drink when socialising with work colleagues. One in five Scottish adults (21%) and a quarter of Welsh adults (24%) who work reported their co-workers have pressured them to drink more than they’d set out to.