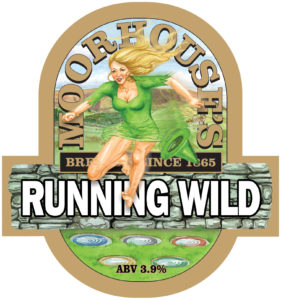 Moorhouse’s is intent on catching the mood of the nation with the roll out of its Running Wild (3.9%abv) brew for August.

The golden, moderate strength, special ale is the latest in the new seasonal range. Tasting notes from the award winning ‘Pendle Witches’ brewer describe the brew as: “Fresh citrus pine and floral aromas. A fruity mouth-feel, with a touch of spice and a hoppy after taste from Styrian Goldings and the late addition of American Mount Hood hops.” A colourful pump-clip shows an athletic young blonde witch leaping through the Pendle countryside.

Managing director David Grant said: “Our brewers have demonstrated peak performance to create a really tasty and refreshing summer brew at modest strength. This is very special ale, we believe, to be the perfect complement the events of a very special sporting August. It is well suited for quick, thirst quenching, sprints or the challenge of a longer haul. We think it will be a real gold medal winner for cask ale enthusiasts.”

The launch of a new £4.2m brewing complex in Burnley last year trebled the former production capacity at the North West’s leading dedicated cask brewer to more than 1000 barrels a week – 15 million pints a year. This means special ales can now be brewed each month to introduce new brews and bring back some old favourites.

Founder William Moorhouse established his drinks manufacturing business in Accrington Road, Burnley, and Lancashire in 1865. Originally it produced mineral waters and then low strength hop bitters for Temperance Movement bars. Moorhouse’s began full strength brewing in the 1970s and in the eighties Manchester businessman Bill Parkinson bought the then ailing brewery ‘because he liked the beer’. Now, Moorhouse’s directly supplies several hundred pubs throughout the region and in Yorkshire, while distributing nationally via leading wholesalers and major pub chains.