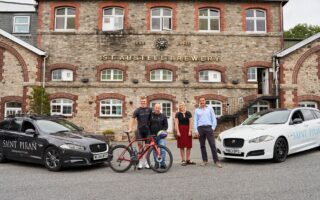 Now in its sixth year, the team competes at the top levels of cycling in the UK and on UCI Continental Circuits across Europe. All eyes will be on Saint Piran when they compete in the Tour of Britain, the UK’s premier road cycling event, which begins this Sunday, September 5th. Cornwall is set to host the opening stage of the race, covering a scenic 180 km from Penzance to Bodmin.

St Austell Brewery’s flagship pale ale is a proud sponsor of team sports across the South West region, including clubs and competitions that form part of the fabric of communities. Saint Piran is closely associated with grassroots cycling and runs a development team that identifies talent with the potential to rise to professional ranks. The Saint Piran Women’s Race Team was established in 2021, giving female riders the chance to join a professional set-up.

Andrew Turner, Managing Director of St Austell Brewery’s Beers & Brands said: “As a business with its roots in Cornwall, we are very proud to announce our partnership with Saint Piran, an inspirational team born in the county and now performing on the highest stage.

“Tribute has long been a brand that champions team sports that sit at the heart of communities across the South West. Saint Piran will be a source of pride for Cornwall when they take on the Tour of Britain this weekend, and we look forward to cheering them on.”

Richard Pascoe, Team Principal of Saint Piran said: “St Austell Brewery has a long tradition of supporting sport in this region and we are delighted to be entering into a partnership with one of Cornwall’s best-known companies. Our riders’ helmets, bearing the iconic Tribute brand, will be worn in the Tour of Britain next week, and will be seen by hundreds of thousands of spectators on the roadsides, and millions on TV. We look forward to a long and fruitful partnership.”

As part of the partnership, the Tribute brand will be visible on striking new professional rider helmets – co-branded with fellow Cornish drink’s brand, Rattler Cyder. St Austell Brewery will also be working in partnership with Saint Piran to raise awareness of the team across competitions, and at a grassroots level providing opportunities for people of all abilities to engage with the sport.