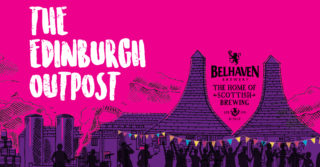 Belhaven Brewery brings Scotland to Shoreditch with its Edinburgh Outpost

Scottish brewery Belhaven, located on the East Lothian coast just outside of Edinburgh, is bringing the atmosphere of the famous Edinburgh festivals to the heart of London’s Brick Lane. Taking over Juju’s Bar & Stage on Friday 4 and Saturday 5 August, Belhaven will play host to two free nights of live music and comedy from well-known Scottish acts, served up alongside the brewery’s award-winning range of Scottish craft and speciality beers.

Visitors to the Shoreditch night spot will be immersed in the festival spirit with sets from comedian Des Clarke, best known as the voice of Scotland’s Capital FM Breakfast Show, and festival favourites, Alfie Brown and Fern Brady.

Scottish folk band Talisk, winners of the 2015 BBC Radio 2 Young Folk Award, and Dundee quartet, Model Aeroplanes will be among the bands performing at the Outpost as well.

Belhaven spokesperson, Gordon Muir said, “August places the spotlight firmly on Edinburgh as the epicentre of entertainment and culture in the UK. We decided to capture that special magic and bring it to the heart of Shoreditch so the good folks of London can experience the best of Scottish hospitality and entertainment and, of course, some beautiful Scottish craft beers.”

Belhaven will be serving a selection of its award-winning beers including Intergalactic Dry Hop Lager, a crisp craft lager with a zippy citrus hop aroma; Twisted Thistle IPA, a mouth-watering citrus beer with bitter bite; and Twisted Grapefruit IPA, made with real grapefruit for an astonishing aroma and bold hop finish.