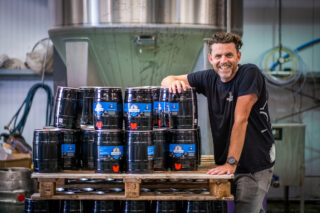 One of Scotland’s most awarded independent breweries has responded to the recent Scottish Government announcement which has forced pubs and restaurants in the central belt of Scotland to close for more than two weeks to curb the spread of coronavirus.

Stuart Cook, joint managing director at Harviestoun Brewery, which is based at Alva, near Stirling, said:

“This is a devastating blow to both breweries and pubs around Scotland. Pubs shutting initially for the lockdown meant a devastating 75 per cent of our revenue disappeared overnight. Thankfully, a nimble change in strategy to online sales allowed us to get through what was undoubtedly one of the toughest times the brewery has known. We’ve seen a record 2000% increase in online beer and lager sales since launching our new next-day home delivery service during lockdown.

“Our deliveries to pubs and restaurants started back up in July, but are on hold again in the central belt of Scotland until an expected reopening date of October 25th.

“Just as the Scottish on-trade was starting to recover though, these measures will be a devastating blow to both the local breweries and the pubs that they supply and partner with.

“All we can do at Harviestoun is continue to ramp up our online next day delivery service and hope that, for the sake of all our wonderful On Trade Licensees and customers that these measures do not extend past October 25th.

“There’s a balance there and those outside the central belt will still be open to a degree, albeit the weather will be a major factor.”

Outside of the central belt of Scotland, alcohol can only be served in outdoor areas until 10pm and Harviestoun will be able to deliver to pubs in areas not affected by the tighter restrictions.

Harviestoun has a growing reputation as a modern craft classic and is a pioneering producer of 10 high-quality craft beer and lagers. Its most famous award-winning beer, Schiehallion (pronounced she-hal-ion) pilsner, is named after a well-known mountain in Perthshire. Schiehallion is unique among British beers as being the only current brand to win the coveted ‘World’s Best Pilsner’ award.

Based at Alva, near Stirling, Harviestoun is one of Scotland’s most awarded breweries and is a pioneering producer of nine high-quality craft beer and lagers, including its most famous award-winning beer, Schiehallion (pronounced she-hal-ion) pilsner, which is named after a well-known mountain in Perthshire:

Press Release from Taste Communications on behalf of Harviestoun