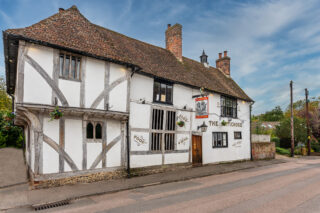 A new face is behind the bar at historic Shepherd Neame pub The Artichoke in Chartham near Canterbury.

Holly Millin has been managing pubs for the Faversham-based brewer for the past three years while searching for the perfect pub to take on herself as a licensee, and was delighted when The Artichoke became available.

Holly, who previously worked as operations manager at Sydney Airport in Australia, managed Shepherd Neame sites including The Parrot and Ye Olde Beverlie in Canterbury and The Limes in Faversham.

She is now the proud licensee of The Artichoke, a pub which has almost 700 years of history within its ancient walls and oak beams. There’s even an old well protruding through the floor – now topped with glass to form a special dining table.

She said: “I have always wanted to run a cosy, old village pub, so this is like a dream for me. It has been hard work since we reopened at the end of October but I’m loving it. It feels brilliant to finally fulfil my goal.”

The Artichoke is one of Shepherd Neame’s most historically significant pubs, as back in the 1650s it was owned by Richard Marsh, who turned it into a brew house before going on to found the brewery in Faversham.

Since taking on the pub, Holly and her team have freshened its look with new décor inside along with new outdoor furniture. The drinks offer has also been refreshed, with an extensive range of beer and cider on draught and in bottle, along with a choice selection of premium wines and spirits – gins a speciality – and a new menu of cocktails.

There is also a delicious new menu on offer. Ingredients are sourced locally wherever possible, and dishes include stonebaked pizzas along with light snacks and traditional pub classics including The Artichoke Burger, Wild Boar Sausages and Mash, Fish and Chips and Pie of the Day.

Holly said: “The village has such a lovely, community feel and the feedback since we reopened has been brilliant. All the locals have been really welcoming, and so many people have dropped off good luck cards we have put them up on the walls. My goal was to find a pub that I would love to visit with my friends and family – and The Artichoke is it.”

The Artichoke will now be open Wednesdays to Saturdays from noon to 11pm, and on Sundays from noon to 9.30pm. The pub has a large bat and trap pitch in its garden which is now available for private hire and functions.

Find out more by visiting www.artichokechartham.co.uk, calling 01227 738316 or by following The Artichoke on Instagram @artichoke_chartham