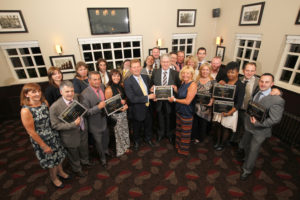 The Ship and Trades at Chatham Maritime has been named Pub of the Year in the Shepherd Neame Pub Awards.

Thirteen of the brewery’s 350 pubs in the South East collected awards for different aspects of running a successful pub, such as serving great food, pulling the perfect pint or being at the heart of the local community.

Judges commended the Ship and Trades for its great management and strong business performance, achieved by the hard work of a dedicated team and talented head chef. The pub has built on its success in last year’s awards, when it won Managed Business of the Year.

The manager of the Ship and Trades, Dean Markham, said: “This is fantastic! We’ve got an exceptional team at the pub, from fantastic kitchen staff through to front of house. We offer the best customer service in the area on a great site.”

Awards were presented by chief executive Jonathan Neame at a dinner held at the Conningbrook Hotel, Ashford, on Tuesday June 26. He said: “These awards celebrate the highest standards of retailing and outstanding offers. We congratulate all our winners and commend them for doing such a fine job.”

The Pub Restaurant Award went to the George Hotel, Cranbrook, for its superb service showing excellent knowledge of the menu and wine list and a good choice of well-cooked dishes with seasonal references, while the Pub Food Award was won by the Queen’s Head, Boughton, for its delicious and wholesome pub food and great service.

The Betsey Trotwood, Clerkenwell, won the Perfect Pint Award for consistently serving Shepherd Neame’s range of beers in peak condition, while the Jamaica Wine House, at Cornhill, in the City, was named Wine Pub of the Year after opening a wine bar in its former cellar and for the staff’s excellent knowledge of wine.

Lee Anderson of the Jamaica Wine House, also won the Manager of the Year Award, with judges describing her as a vibrant, enthusiastic manager driving forward a very successful business, while the Managed Business of the Year Award went to The Crown, Blackheath. Judges said a refurbishment and strong leadership from long-serving manager Keith Hedley had made The Crown the premium pub in Blackheath.

The team of Tony Tarrats, Sarah Smith and Annie Foreman, who took on the Duke of Cumberland Hotel in Whitstable last September, won the New Licensee of the Year Award, while the Tenanted Pub of the Year Award went to the Albion Taverna, Faversham and Ye Olde Beverlie Canterbury, both run by Gareth Finney and Daniel Sidders, who have also recently added a third site to their business, The Parrot, Canterbury. Judges said: “They have shown year-on-year growth with consistently high standards. They are a good example of what can be achieved in the current climate with the right offer.”

The Heart of the Community Award went to The Cricketers, Horsell Birch, for its extensive fund-raising for charity, including raising more than £47,000 for Woking Hospice. The Bull Inn at Linton won Best Garden Award with the Poyntz Arms, East Molesey, winning the Small Garden / Hanging Baskets Award.

A Lifetime Achievement Award was presented to “Dixie” Dean, a former professional boxer, who became licensee of the Prince Arthur, Shoreditch, in 1979. He refurbished the pub and transformed it into a thriving local. He has served for many years on the brewery’s tenant liaison committee and is a valued ambassador for Shepherd Neame.

Managed Business of the Year – The Crown, Blackheath – Keith Hedley

Heart of the Community – The Cricketers, Horsell Birch – Clive Birch and Helen Pillinger

Best Garden of the Year – The Bull, Linton – Bob and Kim Garrett