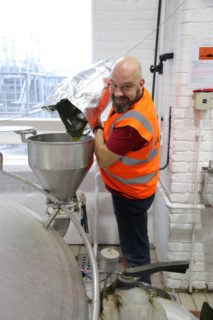 Jyri Oialuoma adds hops to the copper at the Faversham Brewery

Shepherd Neame has teamed up with one of Finland’s leading breweries on a new collaborative beer, unveiled as part of Shepherd Neame’s Cask Club range of experimental, innovative ales.

Howling Wolf (4.5% ABV) is the result of a joint venture between Britain’s Oldest Brewer and Mallaskoski, based in the northern Finnish city of Seinäjoki.

Mallaskoski’s Brew Master Jyri Ojaluoma spent two days in Faversham last month working alongside the Shepherd Neame brewing team. The end result is a dark, full-bodied winter ale that has hints of vanilla and citrus with a bold, smoky finish. The beer uses a combination of American, English and German hops, along with Viking Red malt imported from Scandinavia.

Jyri said: “Shepherd Neame beers are legendary in Finland – I’m a particular fan of Bishops Finger – so I was delighted to be invited to work on a collaborative beer. It was my first visit to Faversham and I really enjoyed my time with the Shepherd Neame team. Our brewery started in the 1990s, so it was fascinating to work in such historic surroundings and also learn about the similarities and differences in our approach to making beer.”

“Jyri was keen to utilise some traditional English hops, so we used East Kent Goldings for aroma,” explained Rupert.  “We also used Mittelfruh from Germany for bittering and Summit, which is an American hop.

“We also used Scandinavian Viking Red malt, which brings a slightly red tint to the beer. Vanilla was added late on and we’re really delighted with the finished brew, which is full-bodied but also easy drinking.”

Howling Wolf will be available throughout November.

It will be followed by Rudolph’s Reward, which is the Cask Club beer for December.