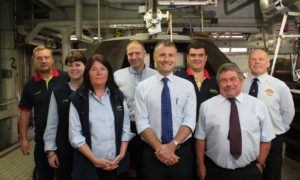 Shepherd Neame beers have won a gold medal, a silver medal and a host of bronze medals in the Olympics of beer, the International Beer Challenge.

Canterbury Jack is brewed with pale and crystal malts and gently hopped with English Cascade and East Kent Goldings grown within a few miles of the brewery, creating a light, refreshing and contemporary 3.5% abv ale, bursting with character and flavour.

Head brewer Richard Frost said: “To win six taste test medals is a tribute to the expertise and experience of all the brewers at Faversham who are dedicated to brewing flavoursome ales of the highest quality and of a truly distinct, Kentish appeal.”

Beers from 26 countries around the globe were entered into this year’s International Beer Challenge, which, for the past 16 years, has rewarded and promoted excellence in brewing, across the wide range of beer styles. The 30 gold medallists will now be judged to decide which is “best in class”, a prestigious award to be announced at a presentation at Dartmouth House, Mayfair, on September 10.

In a separate event, four bottled beers brewed by Shepherd Neame have won awards from the British Bottlers’ Institute in its annual competition to judge the nation’s finest ales, lagers and ciders in bottles and cans.