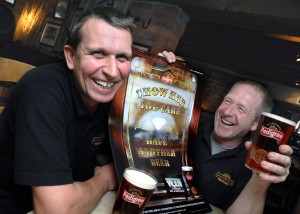 Marston’s Pedigree drinkers will have the chance to win a stunning diamond worth £5,000 in an exciting new safe-cracking promotion to celebrate the beer’s diamond anniversary.

A unique 8-character reference code with every purchase of Marston’s Pedigree in pubs will provide a code to enter an online vault at www.pedigreediamond.co.uk

Once inside the vault the next challenge is to open a safe containing the diamond with a five-digit code offering drinkers a 1:1,800,000 chance to land on the correct code for the safe. If unsuccessful, drinkers can re-enter the vault by buying another Marston’s Pedigree. (Usual terms and conditions apply.)

The promotional campaign will urge drinkers to “Show her you care” with the ultimate man-excuse to pop out for a quick drink.

Des Gallagher, Head of Brands Marketing for Marston’s Beer & Pubs Company said: “With the Queen’s Diamond Jubilee, Pedigree’s own diamond anniversary and the South African cricket team’s long-awaited tour in August a diamond is a sparkling incentive to drive sales for a beer with the clarity and purity of Marston’s Pedigree; a true jewel in our crown.”

The promotion is available to any licensees who purchase 2 x 9s of Marston’s Pedigree from July to September while stocks last with hints and clues being released through social media if the diamond remains unclaimed.

Photo caption: Diamond geezers, David Pickering, brewery engineer and Mark Newton, cooper, both from Marston’s, size up the prize over a pint