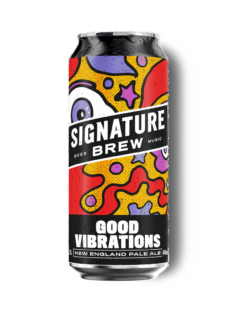 SIBA Brewery Business of the Year, Signature Brew (www.signaturebrew.co.uk), is reopening the doors to their Blackhorse Road Brewer’s Bar, Haggerston Taproom and Walthamstow Burger & Beer Bar, The Collab. Not only that, but the Blackhorse Road brewery is welcoming beer and music starved Londoners back with a full programme of live entertainment, including live jazz, alternative indie DJs, flamenco guitar and more. With change in the air and good times on the horizon, Signature Brew is excited to reveal a new beer, Good Vibrations (5.2% ABV, £4.65 per 440ml can); picking up the vibrations from the brewery sound system, this hazy, golden New England Pale Ale contains cosmic waves of stone fruit and vanilla. Vibrant & velvety, this beer promises to deliver plenty of excitations and is available to order right now, so don’t miss out. www.signaturebrew.co.uk/goodvibrations

Led by founders Sam McGregor and Tom Bott, Signature Brew is on a mission to revolutionise the quality of beer at live music events. Launched in 2011, Signature is the world’s number one brewery for band collaboration beers, having brewed with IDLES, Mogwai, Alt-J, Slaves, Mastodon, Frank Turner, Rodney P, Enter Shikari, Sports Team, Dynamite MC and many more.

The Signature brewery team is made up of musicians and music fans alike and – with an unwavering commitment to quality – Signature Brew has channelled the spirit and energy of live music into a brewery that stands for craftsmanship, artistry and passion. Brewed in Walthamstow, enjoyed by beer lovers and music superfans globally, their beers are of unrivalled quality.

The Covid 19 crisis has seen Signature Brew get creative to keep the beer flowing in people’s homes, creating the Pub in a Box, hand delivered in London by musicians who had their tours cancelled (paid London Living Wage) and delivered via courier nationally. In 2020, Signature Brew hosted a series of socially distanced gigs at the brewery to keep live music playing, they’re also prepping for the sold out Piss up in a Brewery (when indoor gatherings are permitted), as well as two Skints gigs (their first in E17 for 10 years) as something for everyone to look forward to – we can all raise a glass to that!

Signature Brew are gearing up for a momentous 2021, a year that will see the brewery rally around venues and musicians whilst celebrating their 10th Birthday with many more live shows, exclusive beers and band collaborations.  Tables at each of the venues will be set aside for walk-ups, but we recommend getting your bookings in, and we’ll see you soon for a pint in the sun. Fill your fridge with the latest releases by visiting the Signature Brew website or any of the newly re-opened venues.