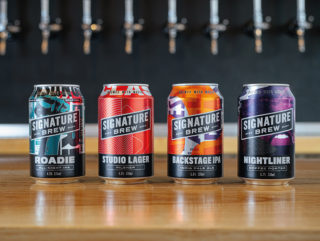 Following their over-funded crowdfunding campaign and prestigious SIBA Brewery Business Of The Year win in 2018, Signature Brew are pleased to announce their new brewery in Walthamstow, East London, while also unveiling a significant and exciting rebrand to coincide with the brewery’s launch.

The double announcement marks a new chapter for the music inspired brewery known for their core range of Roadie, Studio Lager, Backstage IPA and Nightliner as well as their 25+ band collaboration beers with the likes of Mastodon, Slaves, alt-J, Mogwai, Enter Shikari and many more.

Signature Brew co-founder Sam McGregor says, “Our new brewery provides a new home for beer and music in East London and we’re kicking it off with a huge party this weekend. Coupled with our vibrant new branding which celebrates the spirit of live music, it’s a really exciting time for the brewery and our drinkers. There’s no better time to refresh our cans and logo than with the arrival of our new home and the jump in quantity and further increase in quality that it’s already delivering.”

ABOUT THE NEW BREWERY

The successful crowdfund has enabled Signature Brew to build the UK’s most state-of-the-art brewery for its size, immediately quadrupling capacity to an initial annual output of 20kHL (4 million pints) – a significant step up from their previous 5kHL brewery.

This Sunday (17th November) will see them launch their new home near East London’s Blackhorse Road station with a party featuring live music, street food, brewery tours and more. Tickets for this weekend’s event are available here and include a complimentary beer.

Following the launch party, the site’s onsite taproom The Brewer’s Bar will be open to the public on Friday evenings from 5PM and Saturdays and Sundays from 12PM, allowing drinkers to enjoy award-winning beers among the sights, sounds and hoppy smells of the brewery every weekend.

ABOUT THE NEW BRANDING

Carefully timed to coincide with the launch of their new brewery, Signature Brew’s rebrand draws on the art, energy and passion of live music. Each can riffs on a blend of genres from punk rock, to jazz, to the psychedelic and comes with expanded gig poster artwork.The cans are now as vibrant, characterful and exciting as the beer contained within them and the range of art styles mirrors the brewery’s love of all genres, the creativity of their brewers and the diversity of the musicians they work with. Just like genres of music, each piece of art plays by its own set of rules, embodying the spirit of the music itself.

McGregor concludes, “With the increased capacity and branding that reflects the creativity and quality of our beers, we’re looking forward to more drinkers being able to enjoy our beers at venues, bars, pubs and festivals throughout the UK, Europe and beyond.”

Since 2011 Signature Brew have created award-winning, music-inspired beers and collaborated with some of the world’s best musicians at their East London Brewery.