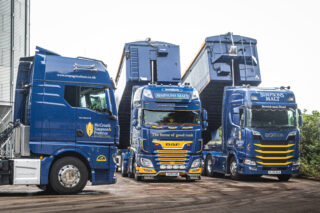 The Transport Department at Simpsons Malt have been celebrating after the company’s haulage fleet was victorious in an award category at the inaugural Transport News Northern Rewards.

The Northern Rewards, which took place in Harrogate on Friday, October 1, to coincide with the three-day TipEx TankEx 2021 exhibition event, recognised and celebrated the achievements of road haulage-related companies and individuals based from the Scottish Borders down to the south side of the M62 corridor.

Up against stiff competition, the group of judges crowned Simpsons Malt the Northern Tipper Operator of the Year – one of 15 awards presented in the ceremony.

Judges remarked on the fleet’s striking livery and extensive nationwide operations as reasons behind the award win, with a significant factor also being the fleet’s switch from diesel to HVO in January 2021.

HVO, or hydrotreated vegetable oil, is a synthetic, paraffinic fuel made from 100% renewable raw materials. It is stable, sustainable and high quality, and has reduced net CO2 emissions from each of the company’s wagons by up to 90%.

Speaking about the award win, Group Fleet Manager David McCreath said: “With so many fantastic hauliers in the north of England, we’re absolutely delighted to have firstly been recognised by Transport News judges and, subsequently, be crowned winners of the Northern Tipper Operator of the Year award.

“At a time when the UK haulage industry is in the spotlight, I’d like to dedicate this award to our hard-working team of 27 drivers, all of whom take great pride in their trucks and ensure they’re looking their best when out collecting barley from our farming customers or delivering malt to our brewing or distilling customers.

“A special mention also to our small team of mechanics, who help to keep the fleet operating smoothly throughout the year.”

Founded in 1862, Simpsons Malt is an independent, fifth-generation family-owned business.

The company’s passion is a focus on making malts with taste, flavour and consistently high quality with the world’s best brewers and distillers in mind, helping them to craft the finest beers and whiskies.

From grain to glass, the company’s malts are certified and fully traceable, produced only from 100%, certified seeds of the finest UK two-row barley that have been procured by the

After more than 155 years in business, Simpsons Malt continues to invest in state-of-the-art equipment at its two maltings in Berwick-upon-Tweed, Northumberland and Tivetshall St Margaret, Norfolk. This constant innovation and drive to improve processes ensures the consistent production of malts with character.

In January 2021, Simpsons Malt completed the acquisition of W.N. Lindsay Ltd, Scotland’s leading independent grain merchant. As a result of the acquisition, Simpsons Malt now owns the grain stores of Gladsmuir in East Lothian (60,000 tonnes), Keith in Morayshire (65,000 tonnes), Stracathro in Angus (110,000 tonnes) and Sidlaw in Perthshire (20,000 tonnes), further securing the company’s malting barley supply chain, as well as increasing the product and service offering to their farming partners.

More information on the company’s switch to HVO can be read HERE.