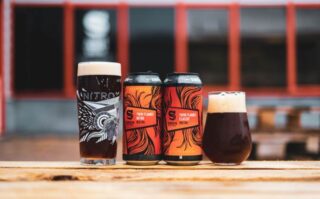 Independent, forward thinking brewery, Siren Craft Brew, is thrilled to announce the launch of Twin Flames – an enticingly moreish duo of Red IPAs with an innovative twist. These two juxtaposing Red IPAs – one carbonated and one nitrogenated – have been created to offer the best of both worlds for craft beer enthusiasts as well as educate newbie beer drinkers, giving everyone the chance to compare the tastes and textures of two complementary beers.

Following the brand’s experimentation with a Nitro twist on its award-winning breakfast stout Broken Dream a few months back, the brewing wizards at Siren Craft have been busy with Twin Flames, proving how experimentation and striving for perfection are at the heart of the brand.

Designed to be two parts of the same soul, Twin Flames experiments with a classic Red IPA to create something pioneering and adventurous. Typically, Red IPAs intertwine intriguing malt bill with highly fruity hops resulting in a striking red or deep maroon colour, offering notes of burnt raisins and biscuit, finished with the fruity tropical hops which makes it the perfect candidate for nitrogenation.

For those who are unfamiliar, a Nitro beer is concocted with a slight modification of ingredients and one big key twist, a dose of liquid nitrogen, which quickly turns to gas to replace some of the carbon dioxide, resulting in a silky-smooth texture.

The carbonated Red IPA, Twin Flames Classic, uses the regular brewing and canning processes as most other IPAs you’ll find around. It uses carbon dioxide so will be thinner and fizzier than its Nitro counterpart with notable differences in flavour too, offering notes of berries and vibrant bitterness.

The nitrogenated version, Twin Flames Nitro, is smoother and heartier and can be poured hard. This mean there’s no need to pour it slow or at an angle (as you would with a standard beer) simply open the can and pour upside down and into your glass for a gorgeous cascade effect and watch a creamy horizon of head settle to the glass rim.

Twin Flames can be purchased individually, as a pair or as part of a mixed case which comes with Siren’s purpose-built Nitro glasses. Not only is this stunning piece of glassware a wonderful bonus, it’s a necessity if you want your Nitro beer to hard pour perfectly – sworn by the Siren wizards themselves!

Twin Flames is available to purchase online and in the Siren Craft Brew Tap Yard from today.

Headquartered in Berkshire, Siren Craft Brew is a passionately independent brewery that is truly believes there is a beer for everyone. Brewed and packed in Finchampstead since 2013, the multi award-winning brewery is proud of its quality, unfiltered, modern, flavour-forward beers using only the best ingredients.

Siren’s top accolades include being named the ‘Best Brewer in England’ by Ratebeer users in 2015, plus a Supreme Champion Beer of Britain award by Campaign For Real Ale in 2018.

The Siren Craft Brew range is firmly rooted in Greek mythology. It is said the sirens’ voices entwine into a complex, layered melody, and so do the ingredients that go into making great beer.a

Starting seven years ago as a team of three, Siren Craft Brew has blossomed into a team of over 40 people with three million pints (five million cans) produced in 2019. Founded by Darron Anley, the modern brewery now exports to 18 countries worldwide, self-distributes throughout the UK and is now stocked by Waitrose, Morrisons, leading chains plus independent pubs, shops, and restaurants (including Michelin starred sites).

Siren Craft Brew also sells direct to the consumer through its website and on-site tap room. The company has a prolific brewing schedule, on average releasing an experimental beer every week. A drinks industry trailblazer, Siren is a leader in barrel ageing and the interplay between wood and beer.

For further information please contact sirencraft@littleredpr.co.uk or give Little Red PR a call on 07866 567 179