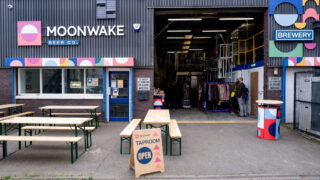 Moonwake Beer Co. on Tower Street in Leith now have outside seating, in time for the Summer sun. Officially launching on Friday 20th May from 5pm with 305 Kitchen joining in the party serving their ultimate, cheesy toasties.

We would recommend enjoying a pint of their newest beer Solero Pale which is tropical and juicy with notes of passionfruit.


Moonwake: “the moon’s reflection on a body of water” speaks to the brewery’s Leith Shore location, the importance of water as an ingredient, and our beer’s reflection of our collective experience.

Directors and brewers Vinny Rosario and Finlay Heslop founded Moonwake Beer Co. in 2021. They started their beer careers on opposite sides of the world, Vinny in New Zealand and Fin in the UK. They bring over a decade of experience in brewing to Moonwake, for both of them it is their creative outlet.