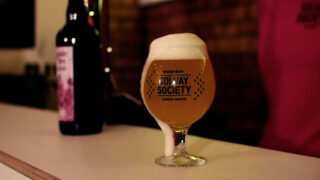 The brewery met their initial £5,000 target within 24 hours when they launched the double-your-money pay it forward scheme in January.

They are now looking to collect the keys for the archway next door to their Leytonstone taproom this week and to begin work on relocating their current Ilford brewery.

Founder and Head Brewer, Roman Hochuli said: “We’re really happy to hit our target and so grateful to everyone who has supported us so far. With the money people have pledged, we’ll be able to fund the move, buy a new tank and upgrade the brewhouse so we can continue to churn out fantastic modern Belgian beer.”

Once completed, the project will expand their Leytonstone taproom into a brewpub, bringing the brewery to Leytonstone and putting the tanks and taps together for the first time.

Being awarded the Mayor Of London’s £5000 grant shall help towards the new flooring and canning line in the new brewpub.

You can still choose to pay it forward and get double your money behind the bar until the campaign closes on February 26th – https://payitforward.london.gov.uk/solvaysociety


Belgian born, London brewed. Solvay Society was founded in 2014 brewing modern Belgian beer on the London-Essex border. Their founder takes inspiration from his Belgian heritage but has been a Londoner for over a decade. Roman uses his scientific background and PhD in Physics to make modern Belgian beer, focusing on the invention and the art of taste.