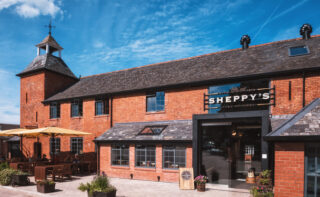 Two of Sheppy’s most popular offerings, Cider with Raspberry and the award-winning 200 variety are now available on draught for the first time in more than 70 Shepherd Neame pubs and hotels across London and the South East.

Cider with Raspberry (4% ABV) suits the tastes of summer cider drinkers and the blend of traditional Somerset apples with pure raspberry juice offers a fruity and refreshing flavour that is not overly sweet when compared to some of the more commercial ciders. Meanwhile, Sheppy’s 200 variety (5% ABV) is a medium sweet, lightly sparkling cider made from a blend of the very finest traditional cider apples, personally selected by Sheppy’s Managing Director David Sheppy. With several awards under its belt, it is a welcome addition to Shepherd Neame’s portfolio.

Both Sheppy’s and Shepherd Neame are long-standing family businesses with a shared passion for provenance and authentic British produce. They initially teamed up last year when Shepherd Neame approached Sheppy’s to refresh its popular Orchard View cider.

David Sheppy, managing director at Sheppy’s said: “Having spent much of the year building our direct to consumer offering during the pandemic, our continued collaboration with Shepherd Neame will propel us back on to the on-trade scene as their venues open back up. Both Sheppy’s Cider with Raspberry and our 200 variety are two of our most popular drinks, so being able to partner with another British family business to bring these long-standing favourites to Shepherd Neame pubs is something we think customers will be very pleased about.”

Nigel Bunting, Shepherd Neame’s Director of Retail and Tenanted Operations said: “We are delighted to extend our successful partnership with Sheppy’s by introducing more of their products to our estate. Our businesses share many similarities, including our commitment to create distinctive, high quality products using expert craftsmanship refined over time and handed down through generations, and we are sure that these additions to our portfolio will prove popular with customers.”

For more information about the ciders, visit www.sheppyscider.com or www.shepherdneame.co.uk

Sheppy’s is one of the oldest independent cider makers in the world with a proud history that goes back more than 200 years. Under the watchful eye of David Sheppy, they continue to champion the same traditional methods, using rare crafting skills to produce the Sheppy’s range of award-winning, premium craft ciders.

For more information about the company and products visit www.sheppyscider.com or follow the brand on Twitter at @SheppysCider.

Britain’s oldest brewer Shepherd Neame has been based in the market town of Faversham, Kent for over 300 years. Perhaps best known for great British classic ales such as Spitfire, which carries the Royal Warrant, its diverse portfolio includes Five Grain Lager, the Bear Island Collection and the Whitstable Bay Collection. It also brews international lagers under licence including Samuel Adams Boston Lager, and is the sole UK distributor for premium Thai lager Singha. The independent family business boasts an award-winning visitor centre and more than 300 pubs and hotels throughout London and the South East, from the historic heart of the City to the Kent coastline.