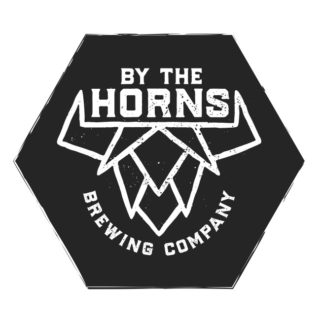 Founded in 2011 by Alex Bull and Chris Mills, By The Horns Brewing Co has been brewing craft beer inspired by their love for both American craft beer and British real ales.

Today, the award-winning brewery brews up to 20,000 pints of beer every week and operates a busy taproom onsite. Their range has evolved over the past nine years, reflecting the changing palate of today’s beer drinker. Their new tagline, ‘All beer no bull’, reflects their commitment to brewing the highest-quality beer possible without any pretences.

They are passionate that the quality of the beer should speak for itself and they challenge the image of independent beer; when they started brewing in 2011, craft beer was an emerging concept in the UK and there was little choice on the market. Today, things have evolved and more customers are looking for bold, flavoursome choices everywhere they drink—whether it’s a taproom or their local pub.

By The Horns is doing things differently. They aim to bring beer lovers together, bridging the gap between traditional and modern styles. They believe that good beer is for everyone and that by spreading their passion for well-made, yet intensely drinkable beer, they can cater to a wide range of drinkers— whether they happen to be a seasoned craft beer lover or just looking for a quality pint.

In February 2020, By The Horns began rolling out the relaunch of their core range and giving their branding a refresh to better and more accurately demonstrate the brewery’s ethos, values and to define their placement in a busy craft beer market. They are unveiling their new look to coincide with the year’s first wave of beer festivals, including Brew LDN.

They are launching their new website on Friday, 21 February 2020.

The reception to the rebrand has already been exceptional—the West End Pils, their core Czech-style lager, was awarded the Best in Category Award (Lager) by the Society of Independent Brewers (SIBA) at the SIBA South East & LBA Independent Keg Beer Awards 2020, which was announced at the Love Beer London festival last week..

The new branding intends to cohesively bring together the By The Horns four core beers with consistent and eye-catching designs. To ensure that every beer is accessible to a broad range of drinkers, all labels contain a description of the beer and tasting notes. The concept is designed to take the mystery out of craft beer and appeal to a wider audience with a delicious and approachable range.

Furthermore, to limit the brewery’s strong commitment to sustainability, all beers are labelled with fully recyclable & biodegradable Tintoretto labels, which are made of uncoated paper using FSC® certified environmentally-friendly ECF pulp, a material more commonly used in the wine industry.

Alex Bull, Co-founder and Production Director, describes the reason behind the rebrand: “As a busy brewery it can be difficult day to day to step back and see where you fit in the marketplace. As a company, we recently spent a good deal of time looking at our brand and the message it was giving to our customers. At times we felt there was a conflicting message with the brewery and the beer itself. We wanted to clean up that message and inform the consumer’s choice in a quick and enjoyable way.”

Chris Mills, Co-founder and Sales Manager, adds: “Each beer is clearly labelled with style and has a brief description on the front so you know exactly how it was made and how it would taste. We have loved working with our designer on illustrations for each design to keep it clean, light and interesting. This rebrand signifies the maturation of our brand by aligning our core values of the business to the visual brand we represent; a straight talking core beer range that is clear and approachable, yet underpinned by quality.”

Plus four seasonal beers released per month (two on cask and two on keg).

By The Horns online:

New branding and assets are available here. Please note that further images will be added to this by 21/02/2020.

By The Horns will be exhibiting at Brew LDN.
Brew LDN is the biggest beer festival in the UK, in the Old Truman Brewery, from the founders of Craft Beer Rising. It takes place between Thursday, 27 – Saturday 29 February 2020.

About By The Horns:
By The Horns Brewing Co. began life as a concept and a vision. Alex Bull and Chris Mills, the founders, wanted to tear away from their corporate jobs and give themselves the freedom to do what they enjoyed most: brewing beer. The UK brewing landscape in 2011 was very different to what it is today and there was absolutely no blueprint for what they wanted to do. In forming By The Horns, their vision was to brew approachable beers, but bring taste, choice and flavour to the fore.

Their brewing style was influenced by both the American craft brewing scene and the British real ale tradition, and so combining these two influences is at the base of most of their creations. Launching in 2011 they cobbled together brewing equipment, rolled up their sleeves with a ‘never-say-die’ approach and began commercially brewing in a small industrial site in SW London. Now the brewery is prospering with an upgraded brewhouse and a tank farm capacity of 320HL and their own on-site high-spec canning line.

By The Horns also runs a busy taproom on site, where three cask ales, 10 keg lines and a cider that is also made on site are served. They have fridges for their canned beers and also offer a full bar service of wine, spirits and cocktails.