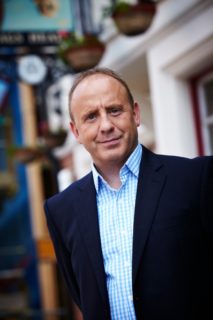 South West brewer and pub company, St Austell Brewery has announced Kevin Georgel will be appointed as its new Chief Executive when the current CEO James Staughton retires in January 2020.

Kevin, who has been a non-executive Board member at St Austell Brewery for four years, has announced his decision to step down from his five-year tenure as CEO of Admiral Taverns, in order to take on the new role with the independent family owned business.

Commenting on the appointment, Chairman of St Austell Brewery, Will Michelmore said: “On behalf of the board, shareholders and the entire team at St Austell Brewery and Bath Ales, I am thrilled that Kevin has agreed to take on the role of CEO when James retires in January 2020 and excited that he will lead our business into its next chapter.

Kevin’s skills, experience and values are a perfect fit for our company, our culture and for the customers we serve so we are all delighted about his appointment and look forward to welcoming him to the business.

Whilst we are fleet of foot and adapt to changing market opportunities, St Austell Brewery is proud to take a long-term view and I am pleased that today’s announcement of both Kevin and James’ plans will enable a smooth handover of this key role from January 2020.

I would like to personally thank James for the huge contribution he has made to our company. Under his leadership our business has grown significantly with beer production increasing tenfold and our pub and wholesale businesses extending from Cornwall to Bristol and beyond. James’ passion for the company means he will hand over the business in excellent heart to Kevin.”

Kevin Georgel, said: “I have known and admired St Austell Brewery, and more recently Bath Ales for a long time. As a non-executive director I have developed a deeper understanding and appreciation of the business, its people and customers and I am thrilled to have been asked to succeed James in 2020. I am enormously conscious and respectful of the values and history of this great company and feel privileged to have been given the opportunity to join the business at this exciting time.”

James Staughton commented: “As one of Walter Hicks’ great-great grandsons it has been a huge privilege and honour to have served this very special family business for 40 years and played my part in helping it grow into the remarkable company it is today. Having reached the age of 60 I have decided 2020 will be the right time to stand down and to pass on the baton to the capable hands of Kevin Georgel. Kevin is a good friend to me personally and we are very fortunate to have such a qualified and experienced Chief Executive to take on the role. I look forward to working closely with Kevin and the board over the rest of 2019 to ensure a smooth transition.”

When James steps down as CEO he will take on the honorary role of President of the Company and will continue to support the business in an ambassadorial role.