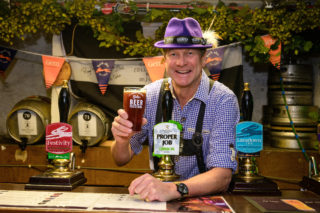 The annual celebration raises funds for the Brewery’s Charitable Trust, which helps to support numerous local charities, good causes and individuals across the South West. Over £200,000 has been raised for the Trust since the Festival started in 1999.

This year’s event featured over 180 ales, lagers and ciders – over 70 of which were brewed by St Austell Brewery and Bath Ales, which became part of the business in 2016. All five bars were run by a team of hard-working volunteers and Brewery staff.

As always, the Festival had a stellar line-up of music throughout the day including local favourites such as King Creature, Countrymen and the Black Rock Jazz Band.

James Staughton, who is retiring as the Brewery’s Chief Executive in January, also made a special appearance on the Music Stage. He joined Michael Douglas – a Neil Diamond tribute act – on stage for an unforgettable ‘Sweet Caroline’ duet, which went down a storm with the crowd.

James Staughton said: “What an incredible day we had! I’d like to thank festival goers, who were phenomenal across the day as well as our sponsors and events team for getting it all together. Of course, I’d also like to thank the bands who performed and all of the staff and volunteers who helped on the bars.

“Our brewing team pulled out all the stops this year and created over 70 brews for the festival – everything from a Double Chocolate Stout, to a Rhubarb and Custard Pale Ale. There really was a beer style for everybody this year.

“We started the Celtic Beer Festival 21 years ago and it’s gone on to become a truly special event – great fun, tremendous beers and all to raise money for important causes across the West Country.”

Rough estimates put the number of visitors across the day at over 3,000, making it one of the biggest Celtic Beer Festivals to date.

More information about the full total raised for the Brewery’s Charitable Trust will be announced in due course. For more information visit www.staustellbrewery.co.uk.