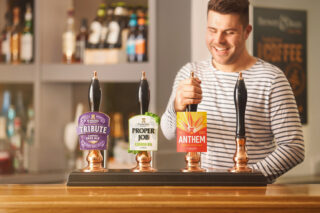 This week, St Austell Brewery is launching a new cask brand into its portfolio –  Anthem, an all-British Pale Ale brewed at 3.8%.

The brewery’s new pale ale is made with 100% British ingredients, including Maris Otter barley grown in Cornwall and East Anglia. The four UK-grown hop varieties – Target, Olicana, Jester, and Harlequin – bring the beer’s fruit packed flavours to the fore. It’s the first new brand launched since Georgina Young took over the reins as St Austell’s brewing director in 2020.

Speaking on the new launch, Georgina Young, Brewing Director, said: “We’re delighted to see Anthem joining the likes of Tribute, Proper Job, and korev as part of our fantastic beer portfolio. It’s a really sessionable beer, made with quality British ingredients and – despite its lower abv – is absolutely jam packed full of fruity flavours.

“Brewing cask ale is a true art form and something which takes time, dedication, and precision to get right. The process of crafting a pint is a real team collaboration – from grain to glass – and we work extremely closely with our network of trusted suppliers to provide us with the finest raw ingredients. We’ve handpicked an all-star British line-up of ingredients for Anthem. The hops are exciting English varieties which emulate the celebrated juicy hop characteristics associated with the US.

“We all know that nothing quite beats that pub fresh pint of cask ale, which is why continuing to introduce new beers like Anthem, and experiment with modern flavours, is so important to us. While cask ale is having a tough time post pandemic, we strongly believe it is part of the fabric of the UK pub and beer market, therefore as one of the country’s leaders in cask beer we will continue to innovate and invest into cask ale.”

Laura McKay, Head of Marketing – Beer & Brands said: “We’re proud to be launching Anthem exclusively in cask although we will continue to explore the category opportunity for the beer in other formats. In a very busy beer market, the role of creating eye catching and stand out brands at the point of purchase has never been so important. Anthem carries a very intentional bold, bright, and energetic design, which ties in perfectly with the beer’s name and is very fitting for celebrating good times at the pub.

Laura added: “Golden ales – which encompass styles including pale ales and IPAs – are continuing to gain share as the fastest growing segment in cask. We’ve called out Anthem’s strong provenance story on the pump clip and hope it becomes a real talking point on the bar. Innovation in the category is vital to meet the taste preferences of today, inject a new life into cask, and showcase just how special this English pub staple is.”

Most famous for its flagship pale ale, Tribute, St Austell Brewery’s range of award-winning beers – also including Proper Job IPA and korev lager – are available in pubs and supermarkets nationwide.

With a network of six depots across the West Country – from St Columb to Wimborne – the company is the leading wholesale distributor of beers, wines, spirits, ciders, minerals, and soft drinks in the region.