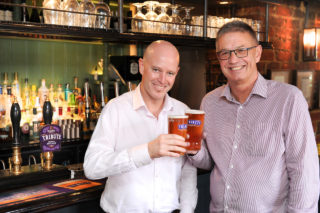 St Austell Brewery has secured a listing for its flagship beer, Tribute, in the White Brasserie Company’s collection of pub-brasseries. The acclaimed pale ale is now available on cask in the 19-strong chain of pubs, which are based primarily in London and the home counties.

The White Brasserie Company, which has Raymond Blanc on its board, is a family of British pubs with a French brasserie twist. Warm and welcoming, each pub serves delicious, fresh, seasonal French fare and British pub classics, as well as a variety of cocktails, fine wines and cask beers.

Tribute (4.2% abv) is light, hoppy and zesty – the ultimate in good taste. With refreshing orange and grapefruit flavours, balanced with biscuit malt, everything about Tribute is carefully considered – from its specially sourced ingredients, through to its sympathetic brewing process. Tribute is famed in its south west heartland and one of the fastest growing cask ale brands in the UK.

In addition to being available on the bar, Tribute pale ale has also been selected as one of the key ingredients in the pub group’s steak and ale pie – available on the new Autumn menu from 10th October.

Bob Chard, national account manager, St Austell Brewery, said: “We’re very proud to see our flagship beer on the bar of White Brasserie Company outlets across the country. Tribute’s quality and consistent taste means that it has maintained its space as one of the UK’s top ten most popular cask ales.”

Find out more about the White Brasserie Company and find your nearest pub, by visiting  https://whitebrasserie.com/.