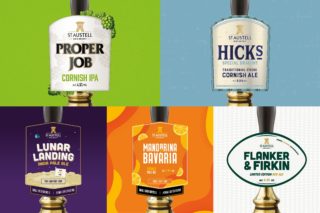 St Austell Brewery has announced that it will be included in the line-up for Nicholson’s Autumn Cask Ale Festival. The festival, which will roll out across Nicholson’s 77-strong nationwide pub estate, will feature over 30 limited-edition cask ales from brewers across the UK (16th September – 27th October 2019).

Launching during Cask Marque’s Cask Ale Week (19-29 September), Nicholson’s is holding the nationwide Festival in celebration of the quality of cask ale – one of its hallmarks.

Bob Chard, National Account Manager, St Austell Brewery says: “Quality cask beer plays an integral part in our British pub culture – expertly brewed using the very best ingredients. Like Nicholson’s, we want to celebrate the category and share our beers with existing fans, as well as those that are discovering cask for the first time.

“We’re delighted to be involved and hope pub goers enjoy trying the huge variety of cask beers on the bar, in Nicholson’s pubs across the UK.”

St Austell Brewery – which has brewed Nicholson’s flagship pale ale since it first launched seven years ago – will be serving the following limited-edition beers during the festival:

To mark the launch of the festival, Nicholson’s will be re-launching an ale trail on the Cask Marque app. In celebration of Cask Ale Week, St Austell Brewery is offering a limited-number of ale-trail goers the chance to receive a three-pack of Tribute pale ale for those successfully completing the mapped-out routes.