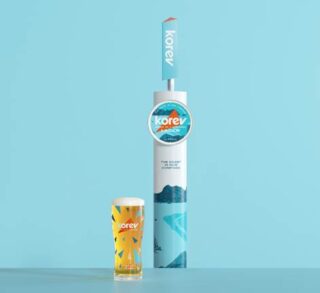 Born in Cornwall and inspired by its home county, the beer is brewed in a Helles style. Backed by an investment of more than £1 million, the new look korev is due to hit pubs, bars and supermarket shelves from May and is set to be one of the most exciting launches this year.

The creative platform for the new-look brand is ‘The Coast is our Compass’ – boldly championing korev’s aspirational and adventurous spirit, whilst remaining proudly true to its Cornish roots. The vivid new colour scheme is inspired by the sea and its coastal origins. The new brand rollout is being carried across all key on-trade assets. A striking new glass, font and tap handle, accompanied by a range of premium point of sale items, has been unveiled to support the relaunch, which was delivered by design agency, Thirst.

Andrew Turner, Managing Director of St Austell Brewery’s Beers & Brands said: “korev has always been a brand with huge potential. To unleash it, we have invested in an exciting rebrand inspired by the spirit of Cornwall and our connection to the coast.

“There’s been so much innovation and investment going into the beer market recently. We’re confident that korev will capture the eye of drinkers this summer. It’s a truly authentic lager – crafted in a brewery with over 170 years of heritage – coupled with a really vibrant new look. As the on-trade re-opens after another significant period of closure, we look forward to welcoming back our loyal drinkers – and saying hello to some new ones – with a beautiful cold, crisp and refreshing pint of korev.”

The rebrand will be transferred across korev’s packaged range with its 330ml can packs leading the way.

korev has been the official beer of Surfing England – the National Governing Body for the Sport of Surfing in England – since 2014. The not-for-profit membership organisation is run by surfers, to further develop the professional sport and support surf coaches, surf clubs and surf schools nationwide. The brand is set to be unveiling more sponsorships in the months ahead, and important causes to protect the environment and British coastline.

The company owns over 180 pubs, inns, and hotels across the West Country – including managed houses and tenancies – and is also the leading wholesale distributor of beers, ciders, minerals, wines, and spirits in the region.