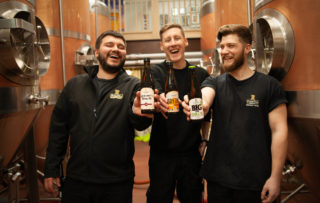 Sayzon (5.9% ABV) is a Cornish interpretation of a traditional Belgian farmhouse ale, brewed with a blend of barley, wheat and oat malts, and gently spiced with ginger, lemon and lime zest. First brewed in collaboration with award-winning beer writer, Melissa Cole, Sayzon has a hint of cinnamon and is fermented with a special strain of ‘saison’ yeast, to deliver an assertive beer with a peppery spice and refreshing finish.

Fans of St Austell Brewery’s award-winning beer, Proper Job IPA – also available in Tesco – will be pleased to know that Big Job (7.2% ABV) is also launching as part of the new range. The big, powerful double IPA – which was crowned champion bottled beer of Britain in 2017 – is jammed full of Cornish barley and Citra and Centennial hops.

Famous for its award-winning cask and bottled ales including flagship beer, Tribute Pale Ale, St Austell Brewery has been crafting beer in Cornwall since 1851. Its Small Batch Brewery, which was installed next to the main brewhouse in 2015, has the capacity to brew 3,000 pints at any one time and has allowed the company to offer its loyal drinkers a range of new, globally-inspired beers.

Roger Ryman, Brewing Director, St Austell Brewery says: “Since installing our Small Batch Brewery, our brewers have been lucky enough to create a whole new world of beers for people to enjoy.

“We’re delighted to introduce these three brews to Tesco shoppers across the UK and be able to showcase the variety of beer styles that we’ve been producing here in Cornwall, on a bigger scale.”