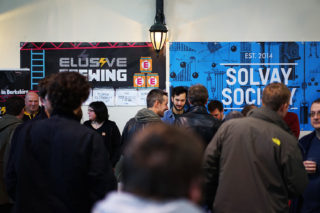 Following successful events in 2017 and 2018, Stokey Beer Fest is set to make a triumphant return to North London in the new year.

The festival will once again be held at Abney Hall, Stoke Newington Church Street, taking place on Friday the 8th and Saturday the 9th of February. The festival focuses on championing small, emerging independent brewers and cider makers from around the UK, such as Liverpool’s Neptune Brewery and Boutillers of Faversham, Kent. There will also be some of craft beer’s most respected brewers in attendance, including revered Bermondsey brewery The Kernel.

“For the last two years now Stokey Beer Fest has distinguished itself as a chilled out and intimate event with excellent beer and 2019 will be no exception,” Stokey Beer Fest organiser Christopher Martin—a Stoke Newington resident and founder of North London’s Seven Sisters brewery—says.

Martin founded Seven Sisters Brewery in North London in 2015, along with business partner Tristan Bradley, before eventually being joined by fellow brewing enthusiast Julio Santoyo. Without a brewery of their own, they ‘cuckoo brew’ at facilities in Bermondsey, Highbury and Ilford. Their first customers included Max Halley of Max’s Sandwich Shop in Crouch Hill and the Rose and Crown in Kentish Town. Stokey Beer Fest is a natural extension of Seven Sisters Brewery’s passion for beer and its surrounding community.

“I’m incredibly excited about the range of breweries and beer styles that we’re going to have at this years festival,” Martin adds.

Early bird tickets are available for as low as £15 (while stocks last) but will rise to the full price of £25 (plus booking fee) on January 1st 2019. Each ticket includes 1/3rd of beer from each of the 12 producers and retailers pouring at the event, plus a free can of beer from Seven Sisters Brewery. If additional pours are required by thirsty attendees, additional tokens will be available for purchase at £1 each, with the majority of beers costing just 2 to 3 tokens.

Sessions will run from 8pm to Midnight on Friday 8th, and 12pm to 5pm, then 6pm to 11pm on Saturday 9th of February. The full list of brewers and retailers attending is as follows: