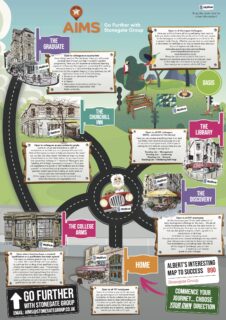 Stonegate Group has announced the launch of its new in-house training pathway this week, Albert’s Interesting Map to Success, AIMS. The pathway has been designed for the company’s head office support staff and is available across all roles – amounting to over 600 different specific learning pathways and spanning from Level 2, all the way to Level 7 (Masters Level). AIMS hopes to engage over 1000 support staff, across both the managed and lease and tenanted divisions, once established.

The pathway has been designed to include both online and in-person learning to reflect the changes of the last 13 months, allowing delegates access to all course material to study in their own time, but without losing the invaluable components of face-to-face learning.

Although not officially a part of Stonegate’s multi-award winning Albert’s Theory of Progression, the new pathway does nod to the company’s front-of-house programme, both in its name, AIMS (Albert’s Interesting Map to Success) and in the naming of its learning areas, all of which are named after Stonegate pubs. The ‘map to success’ is in effect a pub crawl, kicking off at the College Arms for Qualification Lead Learning, before stopping at the Churchill Inn, for Leadership Framework, The Discovery, for Internal Development, and finishing off at The Graduate, which houses the Senior Leadership Development Programme. The framework also includes the ‘Oasis’, which is an online space where delegates can access materials surrounding Wellbeing and Mental Health.

The programme was launched internally this week via CEO Simon Longbottom’s weekly podcast and Stonegate’s internal Facebook group, ‘You are Not on Mute’, both of which have been integral in maintaining engagement with furloughed staff during the pandemic.

Lee Woolley, Director of Learning & Organisation Development, said: “This is an incredibly exciting time for us launching Albert’s Interesting Map to Success. It has been nine years since we launched Albert’s Theory of Progression, which has gone from strength to strength during that time, and nearly four years since we launched the back of house component, Albert’s Evolution, for our kitchen teams, which has been equally successful. I’m delighted that we now have this extraordinary addition for our support staff ensuring everyone in the Stonegate Group business has access to training that is specific to their role.

“This is all part of our ‘Bar to Boardroom’ philosophy where we hope to grow, encourage and enable our own talent to be the future leaders of both our company and of the wider hospitality industry. It has been quite a year, but at Stonegate we are dedicated to the success of our people and the launch of this new pathway shows our commitment to rebuilding over the next 12 months and beyond.”

Following the acquisition of Ei Group on 3rd March 2020 for £1.27bn, Stonegate Group is the largest pub company in the UK.  Its portfolio is comprised of 1,270 sites within the managed division and 3,200 leased and tenanted businesses.

The managed pubs division, which employs 13,500 people, is split into Branded and Traditional pubs. Branded is comprised of: Slug & Lettuce, Walkabout, Be At One and Venues. Traditional (unbranded) pubs are made up of: Proper Pubs, Town Pub & Kitchen, Classic Inns, Common Room and Craft Union.