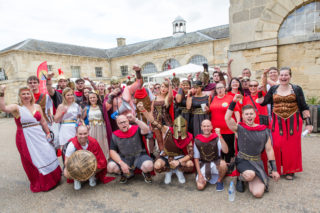 The participants will complete the strenuous five-mile race around central and east London in full Spartan dress, while pedalling in teams of ten on eight cycle chariots.

From now until mid-June, all the pubs in the southern region will be competing to win seats on one of eight chariots; there is one chariot for each Area Manager’s region in the south. The pubs which raise the most money for charity in their area will be allocated a place on one of the chariots.

The fundraising race is already underway, with the pubs coming up with many imaginative ways to encourage their customers and local community to donate, either online at: https://fundraise.cancerresearchuk.org/page/spartan-giving-page-1098, or in collection buckets in the pubs.

On race day, eight teams of riders will begin the circuit in staggered starts, with their 60-90 minute endeavour ending back at the starting point. The two fastest groups will then go head-to-head in a final race to decide the overall winner, before the prize giving takes place at the Minories pub.

Colin Hawkins, Operations Director for the South, who initiated the fundraising idea said: “We’ve all been touched by cancer in some way in our lives, so we wanted to do our bit as a division to raise money to help stamp out this awful disease. The pub teams and their customers are all behind this and together we intend to raise a big chunk for the cause, so let’s all support them and start giving!”

Stonegate Pub Company is the largest privately held managed pub operator in the UK, with revenues in excess of £800m and we employ over 14,000 people. The company has 772 pubs, split into two divisions, Branded, comprising: Slug & Lettuce, Walkabout, Be At One, Venues; and Traditional comprising: Proper Pubs, Town Pub & Kitchen, Classic Inns and Common Room.

Our ‘bar to boardroom’ training ethos has resulted in the following national awards, including: