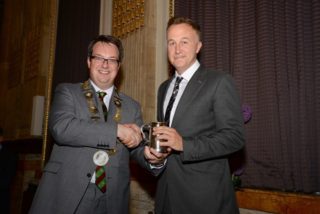 Stonegate Pub Company has been named the Corporate Charity Fundraiser of the Year by PubAid and the All-Party Parliamentary Beer Group (APPBG).

The Award was presented to Stonegate CEO, Simon Longbottom, at the annual APPBG Dinner in Westminster, in recognition of the company’s impressive commitment to charity support across its pubs and head office. Stonegate raises around £1.5 million for charity every year, supporting a wide range of worthy national and local causes.

Co-founder of PubAid, Des O’Flanagan said, “Everyone on the PubAid Steering Group was impressed by Stonegate’s support for charity. Fundraising is seen not as a ‘nice to do’ add-on, but a fundamental part of running a Stonegate pub.

“Managers and their teams demonstrate huge creativity and dedication in their fundraising, which embraces a variety of activities, from Fun Days to fancy dress events, sporting challenges and larger, region-wide initiatives, such as the ‘Spartan Walk’, where 300 southern pubs raised £73,500 for Noah’s Ark Children’s Hospice. Head office are also active within their community in Luton, with ongoing support for the local children’s hospital.”

PubAid also highlighted Stonegate’s northern division’s mission to raise £60,000 for MIND and the Scottish Association for Mental Health. A whopping £45,000 has already been raised by the pubs and bars with a further £9,000 raised by the management and support team who trekked the gruelling Three Peaks. Fundraising continues until September so they are on track to hit the target.

On receiving the award Longbottom said, “It is an honour to receive this award in recognition of the tremendous amount of community fundraising and the phenomenal amount of money raised each year for charities large and small by our pubs and support team.”

Mike Wood, MP for Dudley South and Chairman of the All-Party Parliamentary Beer Group, said “Stonegate has shown what can be achieved when charity support is embedded within a company’s culture, with all employees empowered and enthused to do their bit to help.  Raising £1.5 million a year is a fantastic result and we are delighted to name them as the winner of our Corporate Charity Fundraiser award.”

As well as the Corporate Charity Fundraiser of the Year award, PubAid also recognises outstanding charity support by individual pubs with the Charity Fundraising Pub of the Year award. This award, supported by Magners, was presented for the first time earlier this year, with the Logan Rock in Treen, Cornwall, taking the winner’s title ahead of seven other pubs on a very strong shortlist.

The Corporate Charity Fundraiser award is in its fourth year. Previous winners are JD Wetherspoon, Greene King and Joseph Holt.

PubAid runs the World’s Biggest Pub Quiz, which ran for the first time in 2015. More than 1,000 pubs took part this year, raising an estimated £200,000 for around 500 charities, including Prostate Cancer UK, the event’s charity partner.