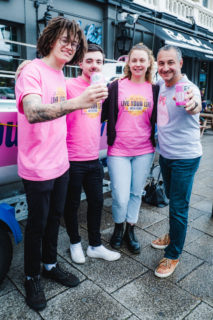 The aim of the week, set up by industry entrepreneur Yaser Martini, was to raise awareness and encourage people to register as stem cell donors. In December this year, a team of three dads will be taking part in the Talisker Whisky Atlantic Challenge and hoping to encourage new registrations from 1.5 million people – the number of strokes it will take them to complete the 3,000 mile journey, hence the campaign slogan #WeRowYouRegister.

During Pinkspiration Week, Martini toured the Team Margot rowing boat around the country, stopping at a handful of pubs and bars including: Three Tuns, Reading; Punchbowl in London’s Mayfair; Oasthouse in Manchester and Belushi’s in Greenwich – the final stop on the tour, which ended on Live Your Life Day, marked across Beds and Bars every year in memory of Franca Knowles.

Operators who supported Pinkspiration Week were: Beds and Bars, All Our Bars, Arc Inspirations, Casual Dining Group, Cirrus Inns, Fuller’s, Glendola Leisure, New World Trading Company and Yummy Pubs. UKHospitality and the BII encouraged their members to back the campaign and Sky Business also communicated it out to licensees.

The Team Margot Atlantic Rowers’ boat is sponsored by cider makers Orchard Pig, part of the C&C group, who recently added Orchard Pig Pink to the range of premium ciders. Perfect for summer, Orchard Pig Pink is a 4.5% gently sparkling cider that combines the light and fruity elements of a rosé wine, with the medium dryness expected from a Somerset cider.

Martini said: “We were delighted with the response to Pinkspiration Week, which marked the launch of Team Margot Atlantic Rowers #WeRowYouRegister campaign, in advance of the start of the Talisker Whisky Atlantic Challenge in December.

“It’s fantastic to have had such a strong response from the operators who committed to it, the teams who activated it in their pubs and bars and the customers who engaged with it. The hospitality industry as a whole came together to lead this initiative with UK Hospitality, BII and British Beer & Pub Association in support. There is no other industry like it.”

Team Margot was set up in 2015 by Martini in memory of his daughter Margot and to honour her legacy after she lost her battle with blood cancer, aged two. Margot was unable to find her ‘perfect match’. Anyone between 17-55 years old who is in general good health can join the stem cell register via a simple swab test.