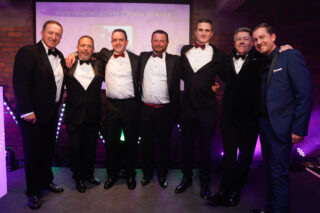 Teams who went above and beyond to ensure pubs remained well stocked with products during the unprecedented challenges of the past 12 months have won an outstanding contribution prize at the annual Pride of Greene King awards.

The awards returned for a second year following a successful launch in 2021. After the first year was held virtually due to Covid-19 restrictions, this year’s event took place on Wednesday 4 May at the Victoria Warehouse in Manchester, with 170 people in attendance.

As well as the outstanding contribution prize – chosen by Greene King CEO Nick Mackenzie – other awards reflected the new behaviours currently being embedded across Greene King as part of the company’s Unleashed culture change programme, with last year’s winners judging the majority of the awards.

The Procurement, Supply Chain & Distribution teams won the outstanding contribution prize because of the challenges they have overcome to keep pubs stocked in the past year, despite a number of world events putting continual pressure on product availability, inflation, and deliveries.

Other winners at the awards ceremony included:

Nick Mackenzie, Greene King CEO, said: “Celebrating successes such as we’ve seen at these awards truly is one of the best things about our great industry. We aim for Greene King to be the pride of British hospitality and the stories we heard from across our 39,000 employees have been exceptional, humbling and inspirational.

“It has been impossibly hard to whittle so many nominations down to a shortlist, never mind choosing an overall winner. It has been a challenging year but listening to the extraordinary efforts and achievements of our teams, I am full of hope and excitement for what the future holds.”