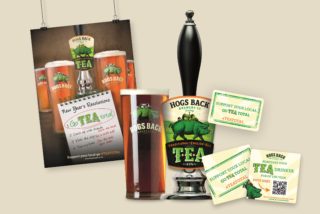 Hogs Back Brewery is reprising its successful ‘Support Your Local, Go TEA Total’ campaign in January, with the aim of encouraging more consumers to support their local at the pub trade’s quietest time of year.

‘Go TEA Total’ ran for the first time in January this year, when more than 150 pubs displayed the campaign pumpclip wobblers or posters. For 2020, Hogs Back is building on the campaign with more impactful assets to create standout in participating pubs, a competition to find the TEA Drinkers’ Pub of the Year, a ‘TEA Total Thursday’ initiative, advertising in Hogs Back’s Surrey heartlands and a social media drive.

The campaign will also remind consumers of the many good reasons to visit the pub in January, from roaring fires to pub quizzes, live music or a dog-friendly welcome. In this, Go TEA Total will amplify the messages of the industry’s Long Live the Local initiative, which shows that socialising with friends is the main reason people enjoy visiting their local pub. The ‘TEA Total Thursday’ social media campaign encourages people to ‘tag’ the mates they’re taking to the pub, with the chance to win a tour of the brewery.

Hogs Back managing director Rupert Thompson said: “We came up with ‘Go TEA Total’ last year to give pubs a boost in January. It’s always been a quiet month for the trade and even more so since the growth of Dry January.

“The campaign has a light-hearted feel, but the underlying messages are important.  January can be a challenging time for many people, but we strongly believe that getting out for a walk to the pub and enjoying a sociable pint or two of TEA can help to counter social isolation and contribute to our overall wellbeing.

“It’s also vital that we all support the pubs at the heart of our communities: if too many people stay away from their local in January, it may not be there in February.”

Pubs wanting to be part of the campaign in January can sign up with their Hogs Back sales manager, or by emailing sales@hogsback.co.uk  to receive a pack of TEA Total assets including pumpclip wobblers, dripmats and posters .

The TEA Drinkers’ Pub of the Year competition is open to all pubs taking part in TEA Total. Customers nominate their favourite pub via the website or the QR code on dripmats, with those with the highest number of nominations included in a shortlist and profiled on the website, before the winning pub is chosen at the end of January.  There will also be weekly competitions on social media for customers to nominate pubs that are best for dogs, or best open fire.

Issued on behalf of: Hogs Back Brewery