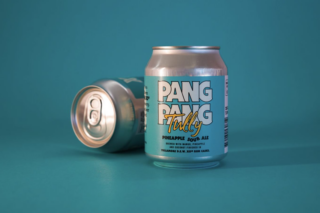 PangPang Brewery specializes in handmade IPA, stout, and sour beer and is Stockholm’s very first microbrewery. The Tullamore D.E.W. distillery located in Ireland and is the world’s second-largest whiskey within its category.

– I was given the task to interpret and translate Tullamore D.E.W. XO into a beer, and the result is PangPang Tully. A kettle sour of which I have picked up and exaggerated the Caribbean flavors of pineapple, vanilla, and rum. To give it another dimension, I’ve also added coconut and mango, says Fredrik Tunedal, founder and brew master at PangPang Brewery.

PangPang Tully is Tullamore D.E.W. and PangPang’s second collaboration and a stand-alone sequel to the successful D.E.W. & A Brew from 2017. At that time, founder and brew master Fredrik Tunedal, visited the distillery in Ireland and for the first time in the history of Tullamore D.E.W., he was allowed to bring back some of the yeast culture used in the manufacture the whiskey. The yeast culture was then used to brew a Nitrogen Red Ale. However, the new collaboration is something entirely different, yet again a small piece of the distillery has left Ireland, this time in the form of used rum barrels in which PangPang Tully has matured.

– For several years, Tullamore produced both beer and whiskey under one roof. As a triple distilled whiskey, we believe that opinions, ideas, and thoughts improve when they are shared and blended. Because of this, it feels extra exciting and fun to continue working with the strong connection between beer and whiskey together with one of Sweden’s most interesting and experimental breweries. The result is an excellent beer with “Irish heart, Caribbean sun, and Hökarängen soul,” says Daniel Andersson, Senior Brand Manager at Nigab.


Tullamore D.E.W. is Sweden’s best-selling Irish whiskey and the second largest in its category globally. Tullamore D.E.W. was founded in 1893 by Daniel E Williams and is the original whiskey used in Irish Coffee. The company is owned by William Grant & Sons, an independent family-owned distillery founded by William Grant in 1886. Today the company is run by the fifth generation Grant and distills some of the world’s leading spirits, such as Glenfiddich®, The Balvenie® Scotch Grant’s® Hendrick’s® Gin, Sailor Jerry®, Milagro® Tequila, and Tullamore DEW®.

PangPang Brewery is located in Hökarängen, south of Stockholm. Fredrik Tunedal founded the brewery in 2010 as Stockholm’s first microbrewery. They specialize in handmade IPA, stout, and sour beer and have made themselves known for their unique and handcrafted beers as well as unconventional brewing methods. Today, they are one of the most influential breweries in the entire Nordic region.