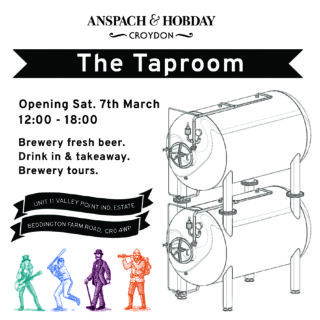 Independent London-based craft brewery Anspach & Hobday have announced the launch of their on-site taproom at their brewery in Valley Point Industrial Estate, Croydon.

From Saturday 7th March, the taproom will be situated within the brewery and home to 6 lines of Anspach & Hobday beer in the freshest way possible, right in the place it’s brewed. The taproom will be open every Saturday from 12-6pm.

On Saturday 7th March, where patrons will be able to see the new brewery, sample the beer and we’ll also be showing all of the Six Nations matches. You’ll be able to join the Facebook event page here.

The launch of the Croydon brewery comes after a £500,000 round of crowdfunding in early 2019, allowing the brewery to expand into the Valley Point Industrial Estate.

The expansion allows Anspach & Hobday to deliver on their Crowdfunding objectives, including tripling their current production to allow up to 5,000 hectolitres per year, introduce a canning line and of course to launch the on-site taproom.

The new site is projected to create three full-time and four part-time jobs over the course of three years, including roles such as production, sales and in the tap room itself.

Chairman and Co-Founder Jack Hobday says: ‘Following our preview party in late December, we’ve been overwhelmed with the positive reception we’ve had from all over Croydon and Sutton. That’s why we’re so excited to finally answer a question we have been asked since the beginning – ‘When’s the taproom opening?’ We can’t wait for it to be open every Saturday, supplying visitors from near and far with the finest and freshest Anspach & Hobday beer – right where it’s brewed.’

Head of Production and Co-Founder Paul Anspach says: ‘We’ve always believed that beer tastes best in the shadow of the brewery. With our new lager tanks we’re very excited to offer that experience to the people of Croydon!’

Anspach & Hobday in particular are known for their diverse range of beers, inspired by traditional styles remade for the 21st century beer drinker, brewing everything from historic ales and porters to experimental sours and IPAs.

Founded in 2013 by childhood friends Paul Anspach & Jack Hobday, A&H are undergoing rapid growth following a successful round of crowdfunding in early 2019. Anspach & Hobday are best known for their flagship beer, The Porter. The brewery epitomises London craft beer brewing traditional styles made for the modern drinker.