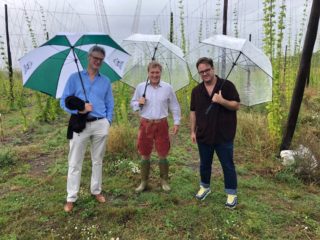 Hogs Back Brewery in Tongham, Surrey, will feature on this week’s Saturday Kitchen on BBC One, to be broadcast on 3 August.

The popular cookery show filmed in the brewery and adjacent hop garden this week to spotlight the essential role that Surrey-grown hops play in creating the Hogs Back beer range.

Saturday Kitchen presenter and chef Tim Anderson spoke to hop garden manager Matthew King in the new 8.5 acre garden, where Hogs Back is growing hops used in the brewery just yards away. When mature, the hop garden should provide 50% of their hop requirements.

Anderson then joined Hogs Back managing director Rupert Thompson in the brewery for a hop rubbing session, followed by a tasting of the brewery’s flagship ale TEA, or Traditional English Ale, which is made with 100% Surrey-grown Fuggles hops, including some from their hop garden.

The Saturday Kitchen team also took away supplies of Hogstar Lager, which will be used to make a beer batter during the live segment of the show.

Former MasterChef winner Anderson, who combines TV presenting chef duties with running his Brixton restaurant Nanban, said: “When I first moved to the UK, I became obsessed with cask ale, because we don’t have it in the USA, and TEA was one of the beers that I really enjoyed. It was very interesting to visit Hogs Back Brewery, find out how growing their own hops is helping them to brew more innovative and interesting beers, and to share a TEA with Rupert.”

Thompson added: “We were delighted to welcome Tim and the Saturday Kitchen team to the brewery and hop garden. Growing our own hops is helping us to better understand the way the ingredients used in brewing come together to produce a great local beer, just as chefs create a memorable dish.

“The hop garden is also an essential part of our commitment to brewing sustainably. With the hops grown just yards from the brewhouse, we are brewing beers with the freshest ingredients – ‘from field to firkin in a furlong’, as we say.”

Hogs Back’s new hop garden occupies 8.5 acres of prime farmland on Manor Farm, where the brewery was founded 27 years ago. With anchors, posts and several miles of hop wire in place, 2,000 hop plants were lifted from the old garden and a further 4,000 new ones planted. Three varieties are grown on the new site: Fuggles, Cascade and Farnham White Bine.

Hogs Back’s original hop garden featured in the BBC TV Countryfile programme in 2016, and the brewery has also featured on The Farmer’s Country Showdown on TV in 2018, and on BBC Radio 4’s On Your Farm programme in May this year.

Saturday Kitchen is on BBC One at 10am, and regularly attracts over 2 million viewers. The episode featuring Hogs Back will screen this Saturday, 3rd August, and afterwards on iPlayer