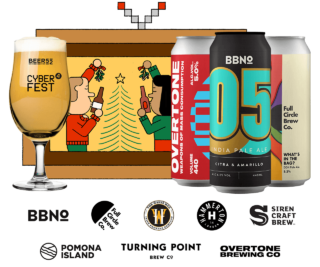 Beer52, the UK’s largest craft beer club, is offering a very ‘2020’ alternative to the traditional Christmas party this year, with two evenings of high-octane, live, online entertainment, plus 24 top-rated beers in the comfort of customers’ own living rooms.

Cyber Fest Christmas Party runs over two nights, 6pm to 10pm on Friday 11th and Saturday 12th December, with tickets costing £34.99 per night (12 beers), or £64.99 for a weekend pass (24 beers), under a special early-bird deal. Business customers and groups of 10+ will also get access to a private room in Beer52’s ‘Cyber Alley’ virtual video bars, while regular customers can log into one of the public rooms to chat with other craft beer fans.

James Brown, co-founder of Beer52, said: “We all miss a good party, particularly at this time of year, so we’re going to bring the festive fun straight into people’s homes. The line-up of beer and entertainment we’ve put together is our best yet, and the perfect way to get together with friends, families and colleagues to mark the end of a very strange year. Kitchen dancing is optional, but definitely encouraged.”

The party follows three hugely successful Cyber Fest weekends earlier in the year, which have attracted more than 65,000 beer lovers and garnered something of a cult following. As ever, hosts Richard Croasdale and Doug Garry will be joined by some of the UK’s most respected craft brewers, including Brew by Numbers, Siren, Overtone and Full Circle, to discuss their beers live.

There’s also a serious side to the evening: as the hospitality sector continues to struggle under Covid restrictions, Beer52 has become many breweries’ largest customer.

“We realised the most meaningful thing we could do for our brewing friends was to put more business their way,” continued Brown. “We do that through our regular monthly subscription boxes, special one-offs like our advent calendar, and through fun events like this. Cyber Fest Christmas Party is an opportunity to put some festive cheer into the pockets of our brewing heroes, while having a lot of fun in the process.”

Tickets are available at www.beer52.com/cyberfest4. To enquire about business packages and group deals, call 0131 285 2684 or email party@beer52.com.

Head to Beer52.com/cyberfest. Buy your festival ticket before Friday 4th December 2020. Early bird day tickets are £34.99 (rrp. £49.99) & an early bird weekender pass is £64.99 (rrp. £99.99), with a delivery cost of £4.99 for all orders. Beer52 will then ship out your case of craft beers in the w/c 7th December, alongside a Beer List and schedule to follow during the festival and details on how to access the live stream. Get those beers in the fridge!

TUNE INTO THE LIVE STREAM

On Friday 11th or Saturday 12th December 2020 (or both!), at 6pm, get your crate of beers out of the fridge and access the live stream to Cyber Fest – you’ll be emailed a link to the stream on the day, or simply head to Beer52’s YouTube channel, where the livestream will be available – www.youtube.com/beer52hq

Join the Beer52 community and sample the beers in the case, as co-hosts, Richard Croasdale, editor of Beer52’s Ferment magazine, and Douglas Garry, Beer52’s Craft Beer Advisor, navigate you through an evening of brilliant entertainment – 20-minute tasting & virtual Q&A sessions with each of the beer’s brewery founders, live comedy, celebrity guests, music and a quiz with prizes on the night!

About Beer52
Founded back in the Summer of 2013, Beer52 was inspired by a motorcycle road trip that founder, James Brown, took with his Dad. Stopping at breweries in Belgium along the way, he found his love of craft beer.

He set out to visit a new country every month in search of the best beers, his friend Fraser jumped on board for the ride and since then Beer52 has become the world’s most popular beer club.

Every month, members of the club receive a selection of beers from a new country, along with Beer52’s in-house magazine, Ferment.  Filled with 100-pages of interesting stories about the beers and breweries, it is a fantastic way to discover new styles from across the globe.

The community has received cases of beer from South Africa, California, Australia, Korea, New Zealand and everywhere in between.  From just £24 per month, including delivery, it represents a great value way to taste your way around the world from the comfort of your own home.