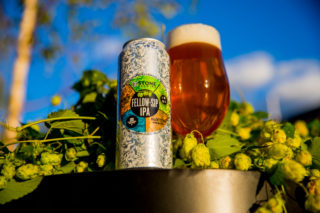 For the fourth release of the Stone UNIQCAN series Stone Brewing has teamed up with some of Britain’s most acclaimed brewers as well as the Independent Manchester Beer Convention (better known as the Indy Man Beer Con or IMBC). The result is one pretty incredible IPA:

The IMBC / Buxton Brewery / Magic Rock / North Brewing Co. / Stone Fellow-Sip IPA, which blends four distinct and groundbreaking IPA recipes, each of which are characteristic to each of the involved breweries. The title may be a mouth-full, but one thing’s for sure – this beer is perfect for reuniting with old pals or making new ones.

The piney-citrus-flavor of the beer is highlighted by hints of cherry and lychee. Its dank hoppy notes are derived from a selection of the best malts and hops found in the breweries’ iconic IPAs: Buxton Axe Edge, Magic Rock Cannonball, North Transmission, and Stone IPA. The combination creates a balanced hop complexity that rounds out this beer.

Greg Koch, co-founder Stone Brewing, commented: “The Fellowship of the Beer. Isn’t this what it’s all about at the IMBC and beyond? Isn’t that what we stand for as craft brewers? I’m very happy we have been able to join forces with three of the most outstanding breweries from the UK – and one of the best festivals – to create this amazing IPA. I look forward to joining everyone at the IMBC in Manchester early October – see you all in the Pineapple Room.”

Jonathan Heyes, from Indy Man Beer Con adds: “Collaborating with our friends from the partnering breweries at Stone Brewing’s Berlin brewery was such a privilege. We can’t wait to see the reaction to The IMBC / Buxton Brewery / Magic Rock / North Brewing Co. / Stone Fellow-Sip IPA at Indy Man!”

The beer will roll out in 0,5L Stone UNIQCANs and will celebrate its official launch at this years’ IMBC in early October. It will then be made available across Europe.

The Independent Manchester Beer Convention is set to be once again held in the Victoria Baths in Manchester and will bring together some of the most forward-thinking breweries from across the world.

Further information and images in printable format can be found in our drop boxes for photos, pictures and logos, as well as further press material here.

Buxton Brewery Company
Buxton Brewery Company, located in Buxton, in the UK’s Peak District National Park first brewed in 2009 and has since gone on to be a widely recognised leader in the new wave of progressive and innovative UK craft breweries. The brewery owns and operates three bars in Buxton, including an on-site Brewery Tasting Room, a Tap-House Restaurant and a beer-only Cellar Bar. Employing a small production and packaging team of 11 folk at the brewery plus around another 20 bar staff, the brewery remains a fierce advocate of small, independent and innovative brewing, with a strong emphasis on experimentation. The marrying together of old and new methods of brewing, and collaborating with some of the worlds greatest breweries ensure that Buxton is on the lips of beer fans all over the UK and well beyond.
Find us on social media at @buxtonbrewery on Instagram and twitter and @buxtonbrewerycompany on Facebook or on www.buxtonbrewery.co.uk

Magic Rock Brewing
Inspired by local brewing traditions and the vibrant US craft beer scene, Magic Rock Brewing is the culmination of a lifelong passion for beer. Richard Burhouse (aided by head brewer Stuart Ross) started the brewery in 2011 in an old out-building of the family business (an importer of crystals and natural gifts) in Huddersfield, West Yorkshire. Alongside a distinctive core range we produce an ever changing line up of idiosyncratic beers with an innovative quality driven approach. Our ‘Same but Different’ beers are packed with intense yet approachable flavours which will challenge and inspire, but above all remain balanced and drinkable. In line with a desire to reflect US beer culture and enhance the UK beer scene, local designer Rich Norgate was commissioned from day one to create a modern and contemporary look for our brand which would resonate with a new wave of beer drinkers bored by the traditional beer landscape.
For more information please visit: www.magicrockbrewing.com

North Brewing Co
North Brewing Co is a 30bbl brewery and tap room situated on the fringe of Leeds city centre. Since launching in 2015, the brewery has quickly established itself amongst the leading breweries in the UK. They produce and serve a range of playful and big flavour beers, which demonstrate an uncompromising approach to quality. Their beers range from their bestselling pale ale Sputnik to their award-winning IPA Transmission to one-off collaborations with other leading breweries. For more information please visit:  www.northbrewing.com | www.twitter.com/northbrewco | www.instagram.com/northbrewco | www.facebook.com/northbrewingleeds

Indy Man Beer Con
The Independent Manchester Beer Convention, better known as the Indy Man Beer Con or IMBC brings together the most progressive, forward thinking breweries from across the UK, Europe and USA for a multisensory, headlong, hop- forward beer extravaganza. This year’s IMBC will take place from Oct 4-7 at the Victoria Baths, Manchester.
For more information please visit: www.indymanbeercon.co.uk

Stone Brewing – Berlin
Nestled in a historic 1901 gasworks facility, Stone Brewing – Berlin celebrated its official opening in September 2016. Hailing from San Diego, CA, since 1996 Stone Brewing has been known for its unique, big-character beers featuring bold flavors that defy traditional style guidelines and expectations. It has been named the “All-time Top Brewery on Planet Earth” by BeerAdvocate magazine, twice. The company’s craft beers are now distributed throughout Germany and more than 30 countries in Europe. The Stone Brewing World Bistro & Gardens provides a destination restaurant devoted to celebrating artisanal food & beer and features up to 75 beers on tap, making it the largest beer selection in Germany. In combination with the amazing beer, the restaurant’s world-inspired cuisine has won the Bier, Bars & Brauer award for “Best Beer Gastronomy in Germany”. Additionally, the company was voted among the Top 10 Breweries in the country of Germany. Lunch and dinner are served daily, and brewery tours (with tastings!) are available in both German and English. For more information, please visit please visit www.stonebrewing.eu or the company’s social media sites: Facebook, Instagram and Twitter.