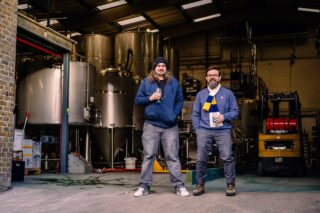 The Five Points Brewing Company have announced plans for an ambitious new combined brewery and open-air taproom. The move allows the company to merge its separate production and warehousing sites into a brand new flagship headquarters in the heart of Hackney, together with plans for what will be Hackney’s largest brewery taproom.

The award-winning brewery, founded by Ed Mason and Greg Hobbs in 2013, also celebrates 8 years of brewing in 2021.

“The past 12 months have been incredibly challenging for independent breweries, as they have for all small businesses. So it is incredibly exciting to be able to look to the future and place the company on a secure footing with a new brewery and taproom, in our Hackney home. I cannot wait to be sharing pints in the sun in our new outdoor taproom this summer”

Customers can keep in the loop with Five Points’ taproom opening plans and their upcoming investment opportunity by signing up for their mailing list at fivepointsbrewing.co.uk/updates.

The Five Points Brewing Company is an independently-owned brewery based in Hackney, East London. Founded in 2013, Five Points brew modern, flavourful, craft beers with integrity and a commitment to the community.

Having grown from sales of £173,000 in 2013, in 2019 they reached combined sales of £4.8million and produced 3 million pints. They opened their first pub, The Pembury Tavern, in 2018 and have won numerous awards for their beer, with on-trade accounts throughout London and national listings in Nando’s, Waitrose and Tesco.

The Five Points Charity Partnership Scheme, founded in 2018, supports local charities and organisations through fundraising and donations. Since the first Lockdown began, Five Points have donated £1 to charity for every order placed on their webshop.

Their 2021 Charity Partners are mental health charity Mind in the City, Hackney & Waltham Forest, and the Hackney Food Bank.

Hi-res imagery to support this Press Release can be found here.