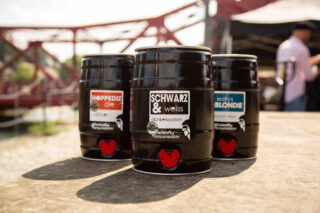 Award-winning Suffolk-based German craft brewery The Krafty Braumeister have launched weekly brewery tours and mini kegs just in time for summer. Krafty handcraft beers in small batches using traditional German brewing techniques. They follow the German purity law of brewing (Reinheitsgebot), meaning that the only ingredients they use are malted grains, hops, yeast and water. All of Krafty’s beers are vegan friendly and free from added sugars and supplements.

Krafty’s microbrewery is open for Tours & Tastings on Wednesdays, Thursdays and Fridays. Visitors will dive into German beer culture and learn about its history and differences. Each guest will be able to try Krafty’s beers accompanied by German snacks and traditional Bavarian Oompah music. Tours & Tastings begin at 5pm and last approximately two hours, visitors are welcome to stay for more beers after this if they so wish. Krafty can also accommodate private group booking outside of regular hours.

In addition to being able to order Krafty’s six core beers in 500ml bottles, beer lovers can now order 5 litre mini kegs directly from the brewery’s website for UK-wide delivery. The new mini kegs contain approximately 9 pints and are ideal for small get togethers, barbecues and party celebrations. Krafty also offer free Click&Collect and local delivery for those Suffolk-based.

There are four main steps that The Krafty Braumeister does differently to most other breweries. Krafty freshly grind the malt grains on brewing day to ensure that the grains’ full flavour ends up in the beer and doesn’t evaporate through long storage. Krafty then use step-infusion to prolong the brewing process and make sure that all the sugars within the grains get into the beer. During mashing, temperatures are increased in stages, ranging from approximately 40 C to 78 C. The sugars found in the beers are solely produced from the grains. They do not add chemicals to speed up the fermentation process, nor do they add finings to clear up the beer’s appearance.

Krafty’s beers are not filtered to ensure that all the natural full flavours and aromas are maintained.Before decanting into bottles and kegs, Krafty adds fresh yeast and unfermented wort into the fermenting vessel, a process called ‘Kraeusening’. This continues the carbonation process and ensures that carbon dioxide is produced naturally in the bottle, which adds refreshing fizziness.

Our German brown ale is brewed with an exciting mix of barley malts. Traditional hops add subtle spicy tones. The recipe originates from the West German town of Duesseldorf, where people call it “Altbier”.

A traditional Bavarian Dunkelweizen (dark wheat beer). It is a moderately spicy, fruity and refreshing wheat-based ale with aromas of roasted and oak-smoked barley malts. It has the yeast and wheat character of a Hefeweizen with the malty richness of a Munich Dunkel.

Inspired by English ales, this beer is brewed with the finest premium Pilsner Malt and Vienna Malt. Three German hops, Mandarina Bavaria, Saphir and Magnum give it a pleasant, refreshing flavour. The well-balanced composure of malts and hops creates a very drinkable summer beer.

This unique beer is derived from Germany’s beer garden region with blue and white skies. This traditional Bavarian wheat beer (Hefeweizen) has a light body with banana and clove flavours produced by the yeast. Suspended yeast gives this beer its characteristic cloudiness.

The Bavarian answer to Bohemian Pilsner. This Helles is a delightful thirst quencher. It is rich golden in colour, with a character of lightly toasted bread and a light sweetness. It is a crisp lager just as it should be: smooth in flavour and high in celebration.

This Kolsch-style beer is a Cologne-style top-fermented “white” beer. A hybrid between ale and lager, it is based on a 100-year-old recipe. It is crisp and light, and a bit hazy in appearance. The name, which translates as Red & White, comes from Cologne’s coat of arms.

About The Krafty Braumeister

The Krafty Braumeister was founded by Uli Schiefelbein in 2018. Uli’s love for brewing began when he was working in Baghdad, where the only available beers were canned, stored at temperatures above 40 C and brewed under license of two of the world’s biggest breweries. There was only one solution: to brew his own. Uli came to Suffolk in 2013 because of his wife Auriol. After studying historical German beer-styles and learning professional brewing in the UK they opened The Krafty Braumeister.

Press release from the Krafty Braumeister